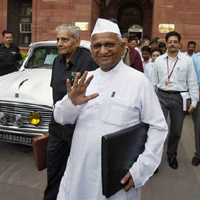 08 November, 2014
Print this article Font size -16+
Social activist Anna Hazare on Wednesday (19 February) declared his support to West Bengal Chief Minister Mamata Banerjee, who apparently has ambitions outside the state in the coming Lok Sabha election, and snubbed his one-time protege by saying that he will not support Arvind Kejriwal.

The anti-graft leader said that he was supporting Banerjee as she responded to his 17-point agenda and agreed to implement it.

"I had written a letter with my 17-point demands to political parties. Didi (Banerjee) responded to it and agreed to implement it. I had also sent a letter to Arvind Kejriwal, but he did not respond to it. So there is no question of supporting him," Hazare said at a joint press conference with Banerjee.

His support to Banerjee comes at a time when his relations with his one-time aide Kejriwal has strained. He had also criticised Kejriwal for taking government accomodation after becoming the Chief Minister.

Hazare said that he supported Banerjee not as a party, but as an individual he admired and that he also backed her views on society and country.

"As the Chief Minister, she could have spent a luxurious life like others. But she stays in a small house, uses no government car. This is sacrifice without which the country and the society cannot progress," Hazare said, adding that four months back he had written to all political parties about his 17-point agenda and Banerjee responded to it positively.

The 17-point agenda included important legislations like protection to whistle-blowers. It also demanded to make government decisions taken in all matters, except defence and foreign affairs, public after two months to bring in more transparency.

He demanded making villages as the nucleus before chalking out policies, land acquisition from farmers without their approval, major electoral changes like Right to Recall and Right to Reject, opposition to privatisation of rivers and reservoirs, ending disparity between the rich and the poor, bring back black money and have a new taxation policy.

When asked whether he would oppose Kejriwal and BJP's Prime Ministerial candidate Narendra Modi, Hazare said he would neither support nor oppose them.

The anti-graft activist, who had led a movement for Lokpal, said he would campaign for "clean" candidates fielded by Banerjee.

Advocating for a change in the political system, he said that even if Banerjee wins 100 seats, the task of bringing in change will be much easier under her leadership.

Banerjee, on her part, said that most of the points have already been implemented by her party in her state after Trinamool Congress formed the government.

"There are issues over 2-3 points like the point on Land Acquisition, but we will discuss on these issues," she said.

When asked from where will the party get 100 MPs, she said, "We have 42 seats in Bengal, but we will contest from Assam, Tripura, Arunachal Pradesh and Manipur. In North and South India, we will talk to Anna and contest after taking his advice," Banerjee said.

Banerjee also said that she will not support UPA or the NDA in the upcoming election.

Hazare said that he would travel across the country from March and mobilise people for a clean government so that a pressure is built.

"In 2019 elections we will have independent candidates across the country and I work on it," he said.