Have We Bottomed Out? 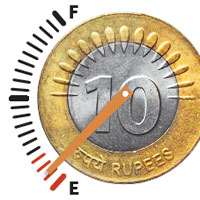 08 November, 2014
Print this article Font size -16+
At 5 per cent — the GDP number for FY13 — most economists say the economy has “bottomed out”. The finance minister says the “worst is behind us”. But is it? In June 2012, once the GDP growth figures for FY12 were released (1.9 per cent down from FY11), many thought the economy couldn’t get worse. The sentiment was repeated when the second quarter (Q2) numbers of FY13 were out at 5.3 per cent, then again after Q3. Now the refrain has become familiar, and boring. Even the Organisation for Economic Cooperation and Development cut India’s growth for 2013 to 5.3 per cent from 5.9 per cent in November 2012. Have we really hit the bottom though?

For starters, the Q3 numbers of FY13 were revised upwards, and Q4 numbers look better. But dig deeper, and we wonder. Capital investment — the big driver of growth during 2004-09 — is down from 4.5 to 3.4 per cent; consumption, that kept GDP growth up over the last two years, is also down from 4.2 to 3.8 per cent; growth in government spending fell from 2.2 to 0.6 per cent.
Once again, the RBI has raised red flags about the threat of imported inflation as the current account deficit gets harder to control. So, expectations of an interest rate cut may take a beating.

Back To The Future
Under pressure, the board of IT mammoth Infosys has gone running back to co-founder N.R. Narayana Murthy for
deliverance. Murthy is back at the helm as executive chairman, and he’s brought his son, Rohan, in tow as his executive assistant. Thus, breaking two of his own credos: that  no children of founders would work with the firm and there would be a retirement age for executives. Now, chairman K.V. Kamath becomes lead independent director and Kris Gopalakrishnan moves from co-chairman to executive vice-chairman, a clear demotion. While in the short run, Murthy’s return may benefit the firm, given that the market landscape has decisively changed in the years that Murthy has been out of an executive role, will he be as effective?
— Venkatesha Babu

Foreign Fiascos
It’s high time Indian firms, and even the government, carry out the required due diligence before venturing abroad. The latest instance of such a lapse is from Vietnam, where Tata Steel, after investing about six years into a project, had to back out. Its $5-billion greenfield steel mill project failed to get an investment licence and land clearance. Even after signing a memorandum of understanding in 2007 and repeated reminders, the land that the Tatas had identified for the project was allotted to a Taiwanese manufacturing firm for its steel plant in 2009.
Previously, ONGC had lost out to a Chinese company on buying hydrocarbon assets in Russia because of the lack
of due diligence on its part. Hopefully, the next time an overseas venture is embarked upon, the homework will be done.
— Nevin John

Sebi Cracks Whip On Promoters
Capital market regulator Securities and Exchange Board of India (Sebi) has turned the heat on promoters of companies who have not complied with its 25 per cent minimum public shareholding (MPS) norms.
The regulator has restricted promoters of 105 listed companies from exercising their full voting rights, and has also put restrictions on corporate activities such as dividend payment, rights issue, stock split and bonus offerings. Sebi has also barred erring promoters from assuming ‘directorship’ in other listed companies. But, according to sources, Sebi is not likely to stop at these tough measures. The regulator may also levy a monetary penalty on promoters who have not managed to meet the 3 June deadline for complying with MPS norms. It is, however, unlikely to take any direct action against the errant companies, since it could go against the interests of small retail investors.
But things aren’t as bad as was initially feared, as investors can rest assured that their portfolio companies, even
if they have not complied with MPS norms, will not be forcibly delisted from exchanges or be shifted to a trade-to-trade settlement cycle.
— Shailesh Menon

12 Minutes, And The Show Goes On
Couch potatoes can heave a sigh of relief. The dispute between broadcasters and the Centre over the quantum of ad time allowed per hour has finally ended; and TV channels have reluctantly agreed to broadcast regulator Telecom Regulatory Authority’s (Trai) formula of allowing a maximum of 12 minutes per hour. This will be implemented by all TV channels from 1 October. In the interim, broadcasters will immediately cap ads to 30 minutes, and then scale down to 20 minutes from 1 July. Though the 12-minute ad time has been part of the cable network Act, 1995, and is also accepted internationally, it was never implemented. TV watching in India is marred by excessive advertising, and for some regional channels, it goes up
to over 30 minutes an hour. Broadcasters, who have been fighting with Trai on this for over a year, however, allege this is an attempt by the Centre to bring them to heel over the aggressive stance of news networks on scams and for campaigning for self-regulation.
— Gurbir Singh

The Realty Route To Votes
The Centre is continuing full-blast with its efforts to woo the public before the 2014 general elections. The latest is the Union cabinet’s approval of the real estate Bill. Applause has come in from harassed homebuyers, but it must be remembered that the Bill has been in the works for more than two years. The sudden rush to make it a law seems to be — like in the case of the food security Bill — necessitated by the looming elections. The objectives of the real estate Bill are laudable —  to bring in transparency and prevent fraud. The Bill proposes a real estate regulator for the housing sector, mandatory registration of projects before sales, disclosure of all project details (including clearances obtained, site maps, etc.), among other measures. But it is yet to be seen whether the Centre means business, or whether the real estate Bill too will join the long queue of pending legislation in Parliament. If the government is
serious, it should enact the Bill by promulgating an ordinance.
— Gurbir Singh

Right Call: Time To Take On Big Pharma
Now that the Supreme Court (SC) has endorsed the Centre’s view in the Novartis-Glivec case, saying that India is right in using the flexibility offered by the World Trade Organisation to provide affordable medicines to its people, it’s time the government took it up as a matter of right, rather than be defensive about it. US-based pharma company, Pfizer, recently complained to a US House Committee looking into India-US trade relations, urging the US government to use all available policy tools to compel India to favour the global drug industry. The firm alleged that India had systematically failed to interpret and apply its intellectual property (IP) laws in a manner consistent with recognised global standards. This comes in the wake of the SC’s decision to deny Swiss multinational Novartis a patent for its cancer drug Glivec in India. Although this disapproval of India’s patent regime is not new — the US Trade Representative (USTR) has been complaining about India’s IP regime for long now — Pfizer’s allegation certainly warrants a formal response.

Especially since this can have an implication well beyond the pharma industry. ­
— Joe C. Mathew
Politics Rides Pillion On New Facility
When Honda Motorcycles and Scooters opened its new plant at Kolar, Karnataka, in May, there was a fair share of requests from members of the newly elected Congress government. Even though the Rs 1,350-crore plant will draw 90 per cent of its workforce locally, the demands of the party were nothing short of absurd. Although, what is probably more absurd, was that the demands were actually accepted (at least verbally). One such request was to pay farmers more for their land when compensation had already been agreed upon and paid during the tenure of the previous BJP government. But that’s not all. A local MLA, Manjunath Gowda, not only managed to convince the Honda executives to hire ‘his boys’ at the factory, but also allow him to set up his office in the plant’s vicinity to keep a tab on the employees. Considering such important decisions are influenced by ‘power-wielding’ MLAs, is it surprising why the Indian auto industry is plagued by strikes or even why manufacturing never really reached its potential in India?
— Vishal Krishna
Will It Be Much Ado About Nothing, Again?
It’s a measure that’s doomed to failure, even if it’s paved with good intentions. The coal ministry has asked the petroleum ministry to hand over coal-bed methane (CBM) blocks relinquished by firms, so that it can reassign them to power producers for captive mining. This, it expects, will address the severe coal shortage that the power sector has been battling for the past 18 months.

But the question being asked is: given that only eight of 81 blocks that were allotted to various power firms have started production since 2003, will the move to hand over more blocks for captive mining work? Thus far, power firms have cited lack of clearances from various ministries and departments and poor coal quality as the major reasons for non-production of coal from the blocks. So, even if the coal ministry reassigns the CBM blocks, precedents suggest roadblocks may be expected from other government departments. For now, it seems as if better communication before reallocation is the need of the hour.
— Chhavi Tyagi