Have Feet, Will Dance 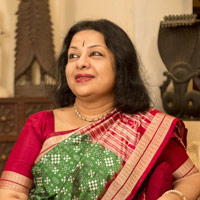 08 November, 2014
Print this article Font size -16+
In the 1990s, when I left America with an MBA degree to come back to India, well-wishers told me I had made a mistake. No one gave up dollars for rupees. Almost immediately though, I got a job with Standard Chartered Bank and walked every morning from Colaba to the bank’s imposing grey-stone heritage building in the Fort area. The interiors had just been renovated. As air-conditioned ambiences went, with its blend of old mortar, colonial rhythms, cubicles lit by the novelty of
computer screens, I ought to have considered myself lucky. The pay in rupees was handsome and there were the joys of life in Bombay that dollars could not buy.

Only, I had learnt classical dance from the age of eight and was dancing professionally by the time I was in college. Memories of a thatch-roofed cottage in Madras, where I had learnt to weave my limbs across space to time’s beat, kept intruding into this world of giant dusty ledgers and numeric records kept of other people’s money. Equally, I was a poet, whose poetry had inexplicably dried up in America. My idea of myself was defined, amorphously, in terms of art— words, poetry, language, rhythm, a dancer’s jewels, music, imagery— and at its heart beauty, great beauty. But here, the dancer’s feet wore low heels; her body wrapped in an office-appropriate sari she sat all day in an Assistant Manager’s chair, staring at the hands of the clock.

It was not as though the work was uninteresting. There was enough to occupy the mind through the day as I studied work-flows, banking rituals, and practised my ‘chop’ or signature of authority. But it did not grip my imagination, and I soon realised I did not have the febrile ambition my colleagues had as they sweated over decimal places in foreign exchange rates or stayed late auditing computer print-outs of debits and credits, all to advance a notch up the corporate ladder.
My dreams were lateral. While my body was immured in the office, nine to six, my mind wandered free. I reminded myself that T. S. Eliot, and P.G. Wodehouse, and closer home in Bombay, Rohinton Mistry, had all worked in banks. Perhaps this was necessary apprenticeship. I watched the ebb and flow of people across the great halls of the bank and on the noisy pavements outside, studied faces, imagined their lives.

I remembered the life I had led as a student in America, how different it was from what I had expected, and one day, surrounded by files piled high and cheques being processed, inward and outward clearing, came the idea of writing a novel. I knew I wanted to translate my experience, transfer it to paper, but it was not easy. It took shape slowly, sentences becoming pages and then a chapter. Magically, in the guise of a ‘banker’, amidst the seductive buzz of commerce and the din of line-printers, I had found my path.

When transferred to Madras I found myself in the thatched cottage, practising dance on week-ends. The salary I earned being bored every work-day appeared miraculously in my bank account, money I could use to buy books (goodbye musty lending-libraries) and fund my dance. If the day meandered drearily, the evenings were alive with artistic endeavour. I had written perhaps a hundred pages of the novel. It was half a life.
The Transition
I worked in the bank for four years. Then, just as magically, I became a mother. After three months, when it was time to return to work, I could not imagine leaving my baby crying for milk while I counted hours in the bank. I quit. It was a decision I had long considered, and now the time was right. Once again, well-wishers told me I was making a mistake; only a fool would give up such money. Others, both women and men, told me that dedicating myself to raising my child was no reason to quit a ‘hi-fi’ job. Eighteen years, a grown-up son and three books later, I’m certain that I did benefit from my time in the bank— I can count notes of cash in a flurry between my thumb and index fingers just like a real cashier!

Badrinath is the author of Master of Arts: A Life in Dance, a narrative on Bharatanatyam