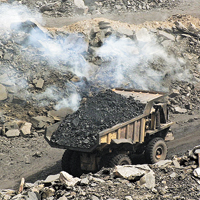 The slowdown in growth in the six core sectors — crude oil, petroleum products, coal, electricity, cement and finished steel — is also going to reflect in the index of industrial production (IIP) growth numbers, which have shown a rebound and even touched 10.4 per cent in August 2009 (core sector has a weight of 26.68 per cent in IIP).  According to D.K. Joshi, principal economist with rating agency Crisil, the IIP for September will not be in double digits.

However, the bleak numbers of core sector growth should not trigger a panic of a slowdown. First, slowdown in core sector during September, is partly on account of a dip in the growth of coal production. But this is also the month where hydel power generation picks up and coal-based stations are either shut or reduce generation, therefore, requiring less coal.

Second, IIP numbers form an important input in projecting the GDP (gross domestic product) growth for the entire fiscal. If there were signs of a slowdown in GDP, then these would have been reflected in even the Prime Minister's Economic Advisory Council's (EAC) projections made a few days ago. EAC put the growth of Indian economy at 6.5 per cent during this financial year.

"The long-term view is that it has grown 5 per cent during the first half of this fiscal, which we expect will be strengthened in the coming months," says Joshi.