Hang On To Your Top Talent 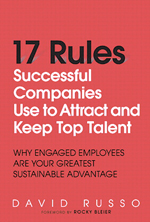 08 November, 2014
Print this article Font size -16+
This book on direct management addresses employee engagement and retention head on. The author, David Russo, draws on over 30 years of being in the field of human resource management to compile the book, which is full of examples narrated in a conversational tone.
With a foreword by former American football star Rocky Bleier, 17 Rules extensively uses examples and analogies from the world of sports. The narrative also draws examples from software giant SAS — where the author headed human resources for 19 years — and from organisations such as healthcare products giant Johnson & Johnson, Southwest Airlines, Minitab and even the CIA — yes, the real version of what we see in those Hollywood flicks. The author also cites examples from a failed dotcom startup he was part of, giving credibility to some of the adverse impacts that he talks about.
Russo starts by saying that employees today are not conscripts or servants; they are more like volunteers who barter their services for an opportunity to be part of something meaningful and worthwhile. The idea may sound revolutionary, but the author reasons to this point by tracing the origin and evolution of employer-employee relations and the changing balance of power and initiative between them.
An engaged employee is one who can find her “preferred self” within the organsational environment. She delivers an elusive success factor called “employee discretionary effort”, which pays the organisation long-term dividends. The book talks extensively about factors such as favourable environment; trust at the workplace; importance of ethics and most of all the role; and desired behaviour of leadership.
A summary of the 17 chapters, given at the end of the book, makes for a good reference. In fact, the book should make for reflection by executives of fast-growing Indian companies who may not be looking beyond the explosive growth phase.
(This story was published in Businessworld Issue Dated 29-03-2010)
Tags assigned to this article:
magazine business book review selection sports management hr employment ft press 17 rules david russo richeek maitra