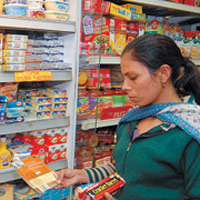 08 November, 2014
Print this article Font size -16+
Hindustan Unilever Ltd will intensify a price war against lesser-known detergent and skincare brands this year as it seeks to win back India's increasingly thrifty shoppers and reverse four consecutive quarters of slowing sales.

HUL, India's largest consumer goods maker, has already cut prices of some soaps and detergents by 15-18 percent over the past month to fight off competition from smaller domestic rivals like Rohit Surfactants, Bharti Soap Works and skincare firm Ayur Herbals.

"It will be a tough year for big companies like HUL," said G. Chokkalingam, chief investment officer at Centrum Wealth Management, who has a hold rating on the consumer goods sector. "Most will have to spend heavily on promotional activity more than ever to retain and regain market share," he added.

Analysts on average had estimated a profit of Rs 760 crore on sales of Rs 6420 crore, Thomson Reuters Starmine Estimates showed. Net sales for the quarter were 13 per cent higher at Rs 6,360 crore while net profits were at Rs 780 crore.

Sales volumes for the quarter, however, grew a more conservative 6 per cent, slightly higher than analysts' expectations of 5-5.5 percent growth.

"The stress on volumes will continue for at least the next two quarters after which there might be a revival," said Phani Shekhar, fund manager, portfolio management services at Angel Broking. "We may see consumers switch to low price point products during this time, especially in soaps and detergents."

HUL, India's 13th-largest listed company with a $18.6 billion market capitalisation, posted operating margins of 15.02 percent this quarter, up from 14.05 per cent a year ago.

Sales at the home and personal care segment grew 12.7 per cent, while its food business grew 15.1 percent. These segments have been hit due to the dip in consumer demand.

HUL shares, which have fallen 11 percent since the start of 2013 compared with a 3 per cent rise in the consumer sector's benchmark BSE FMCG index, rose as much as 6 per cent after the results on Monday, 29 April.