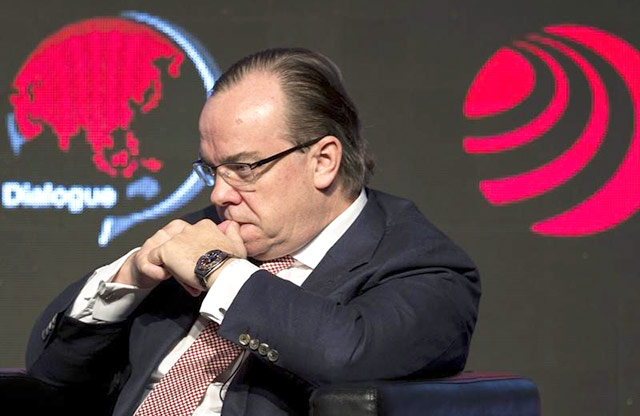 25 February, 2015
Print this article Font size -16+
Europe's biggest bank, HSBC said its chief executive, Stuart Gulliver, holds a bank account in Switzerland that was set up in 1998 to hold bonus payments, responding to a report in the Guardian newspaper that said he had a Swiss account that contained $7.6 million in 2007.
A spokeswoman for the bank gave details of the account and of other issues related to Gulliver's tax status, following the Guardian story.
The spokeswoman said Gulliver set up the account when he was living and working in Hong Kong to hold bonus payments. Full tax was paid in Hong Kong on the bonus payments and Gulliver has voluntarily declared his Swiss account to U.K. tax authorities for a number of years, the spokeswoman said.
She said the account was set up in 1998 in the name of a Panamanian company for reasons of confidentiality "and this had no other purpose and provided no tax or other advantage." She did not say how much the account contained.
There was no suggestion in the Guardian report that Gulliver broke any rules.
HSBC is under scrutiny after allegations that its private Swiss bank helped clients dodge taxes. Gulliver has admitted failings in HSBC's Swiss arm in the period up to 2007 and apologised to investors and customers, but said the business has been transformed and standards are now up to scratch.
The Guardian report, citing leaked files, said Gulliver was listed as the beneficial owner of an account in HSBC's Swiss bank in the name of Worcester Equities Inc, an anonymous company registered in Panama, containing a balance in 2007 of $7.6 million. It was through this entity that Gulliver’s HSBC bonuses were paid until 2003, and he also held a second account in the name of Worcester Foundation, which had been closed before 2007, the Guardian said.
The Guardian also reported Gulliver had remained domiciled in Hong Kong for legal and tax purposes.
The HSBC spokeswoman said Gulliver was a non-domiciled U.K. tax resident.
He moved to Hong Kong in 1980 and became a permanent resident with right of abode, along with his wife who is an Australian national, the spokeswoman said.
"Hong Kong is Mr Gulliver's home and as a matter of law he is domiciled in Hong Kong. It should not be a surprise that Mr Gulliver, who has spent the majority of his nearly 35-year career at HSBC in Hong Kong, has made his home there," the spokesperson said.
"Since being posted to the UK from Hong Kong in 2003, Gulliver has paid full UK tax on the entirety of his worldwide earnings, less a credit for tax paid additionally in Hong Kong (where he is also tax resident) on that part of the same earnings doubly taxed," the spokeswoman said.
Non-domicile status and the remittance basis rules do not affect the U.K. taxation of his worldwide earnings from HSBC, the spokesperson added.
(Reuters)
Tags assigned to this article:
news 3 switzerland hong kong hsbc stuart gulliver tax havens