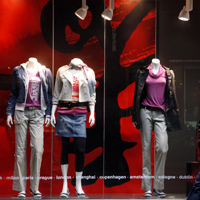 08 November, 2014
Print this article Font size -16+
Hennes & Mauritz plans to spend around 100 million euros on an initial 50 stores in India, hoping a growing population and rising incomes in Asia's third-largest economy will fuel demand for its fast-changing fashions.
Fredrik Olsson, head of expansion at the world's second-biggest fashion retailer, said in an interview the Swedish group would continue a rapid rollout of stores across the world as it battles to catch up with larger rival Inditex.
Both H&M and Spain's Inditex, which owns the popular Zara brand, have fared better than most clothing retailers in a faltering global economy, thanks to a focus on bringing catwalk styles to the mass market at a fraction of the price.
But H&M has lagged its arch-rival, in part because it does not have the same scale or presence in fast-growing emerging markets. While H&M has around 2,800 stores in 49 countries, it still makes about 80 per cent of sales in Europe. Inditex, meantime, has over 6,000 stores in 86 countries and makes about 20 per cent of sales in Asian economies versus 6 per cent for H&M.
Olsson said H&M had made an investment application to the Indian government, adding the figures were just an estimate. He could not give a time-frame for the opening of a first store in the country.
"It is a very interesting market with a huge population and a growing middle class," he told Reuters at H&M's headquarters in downtown Stockholm's shopping district.
A flurry of international retailers, including Swedish budget furniture chain IKEA, are looking to expand into India after its government moved last year to allow foreign firms to set up wholly-owned subsidiaries in the country. Inditex is already in India through a joint venture.
Indian retail consultancy Technopak has predicted the textile and clothing market in the country would more than double to $141 billion by 2021, from $58 billion in 2012.
In recent years, H&M has been adding other brands to its core H&M chain, such as & Other Stories, to broaden its customer base and mimic the variety of brands offered by Inditex.
In India - as usual for new market entries - H&M would start with the core H&M brand, Olsson said, adding it had applied to sell nine different product categories.
Global Growth
H&M has seen like-for-like sales shrink for six straight months and they are unchanged on average in its past two fiscal years due to the economic downturn in Europe.
However the group, which is about 43-per cent owned by the founding Persson family, is debt free and Olsson said it would continue expanding across the world, whether to prepare for an eventual upturn in Europe, to boost its position in a recovering U.S. market or grab a bigger share of emerging markets.
"We have found and mapped loads of (potential) store locations," he said, adding H&M had a competitive advantage in securing good sites during the downturn because of its track record as a tenant.
H&M aims to increase its selling space by around 10-15 per cent a year, compared with Inditex's long-term target of about 10 per cent, and Olsson saw no change to H&M's goal.
Most new stores this year are planned for China and the United States, as in 2012, and Olsson said those countries would be high on the agenda next year too.
H&M will set up shop in Australia next year, only its second country in the southern hemisphere after entering Chile last month as one of five new markets this year.
Olsson said more new countries were on the cards for 2014, and pointed to Brazil as one potentially interesting market.
Shares in H&M, whose chief executive Karl-Johan Persson is the grandson of the founder, have lagged the STOXX Europe 600 retail index by 13 per cent over the past year, and Inditex by 30 per cent. They trade at 21.2 times forecast earnings, well above a sector average of about 10.6, but below Inditex's 23.5, according to Thomson Reuters data.