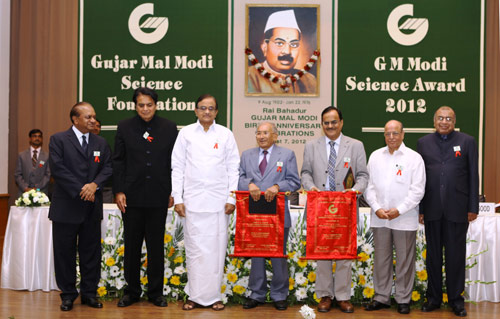 The ‘Gujar Mal Modi Award for Innovative Science & Technology 2012’ was given to professors Khadg S. Valdiya and Ajay K. Sood for their contributions in the field of Himalayan geology, neotectonics and environmental geology and physics in a ceremony held at Shri Sathya Sai Auditorium, Lodhi Road, New Delhi on 7 August.

The awards — consisting of a cash prize of Rs 2.01 lakh, a scroll of honour and a silver shield each — was handed over to the scientists by finance minister P Chidambaram.

Prof Valdiya is internationally recognised for his work in the fields of geology and environmental science. At present, he is an honorary professor of geodynamics at the Jawaharlal Nehru Centre for Advanced Scientific Research, Bangalore.

Prof Sood is currently the president of the Indian Academy of Sciences. He is also serving on various advisory bodies of the Government of India including the Science Advisory Council to the Prime Minister, Science Advisory Committee to the Union Cabinet and the Nanomission of DST.

Addressing the audience, S.K. Modi, President of the G.M. Modi Foundation said: “To avoid power cuts in the country, we can innovate and bring about easy use of solar energy which is abundant in India as a solution to India’s energy problem,”