Growing Up, Getting Better 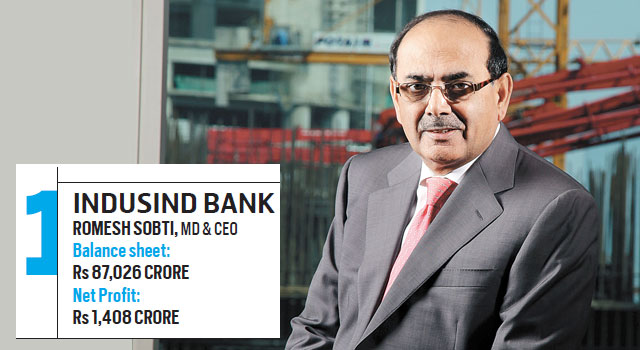 14 January, 2015
Print this article Font size -16+
IndusInd Bank turned 20 in FY 2013-14. The bank also marked the final phase of its ‘scale with profitability’ plan, first articulated three years ago. Clearly, the Hindujas-promoted private bank has put its adolescent years behind it. More on that later. Let’s first acknowledge that for the second year running, IndusInd Bank has bagged the honour for the ‘Fastest Growing Mid-size Bank’. This year, it has also been adjudged the ‘Best Mid-size Bank’ by the BW | Businessworld - PwC Best Banks Survey.
The road to achieving this position has not been easy for IndusInd Bank. Unlike others, its loan book answers to a rather unique profile — a high exposure to sectors such as commercial and utility vehicles (CUV), which are the first to get hit in a downturn. At the end of March 2014, of its total advances of Rs 55,102 crore, 45 per cent was to consumer finance, with CUVs accounting for 21 per cent of it. The bank, in fact, called correctly — considering the lacklustre space and its attendant woes — and pared its appetite. In the previous fiscal, of the total advances of Rs 44,321 crore, 50.5 per cent was towards consumer finance, of which the CUV share was 26.5 per cent.
Says Romesh Sobti, managing director and chief executive officer: “We knew that the vehicle finance market would be tough, that margins would be under pressure, and that we would have to focus on fees.”
What went in the bank’s favour was that in the vehicle finance sector, every other lender in town had decided to give up. From around 40 serious players — banking and non-banking finance companies put together — the market became the turf of a handful. This gave the bank an opportunity to hike exposure to two-wheelers, car loans, credit cards and loans against property. This, even as exposure to large, medium and small corporates cumulatively, as part of the bank’s overall book, swung to 55 per cent from 49.5 per cent in the previous fiscal.
Sobti has not been one to chase market share, and this paid off on the dud-loan front. The bank clocked 0.33 per cent in net non-performing assets (NPA) — it fared slightly better in 2012-13 with 0.31 per cent — while the provisioning coverage ratio held at 70.35 per cent, against 70.13 per cent in the previous fiscal.

The bank’s share of current and savings accounts (Casa) also improved. While deposits rose 11.80 per cent to Rs 60,502.29 crore, Casa share moved up to 32.55 per cent from 29.32 per cent in the previous year. The ‘My Account, My Number’ plan that allows customers to choose an account number of their choice helped the bank consolidate its Casa share.
“There is linearity between branches, Casa and customers,” says Sobti. IndusInd Bank extended its reach to 602 branches from 500 in 2012-13, while its customer base shot up to five million from two million.
Although the bank’s yield on advances declined to 13.56 per cent, the bright spot was the cost of deposits dipping to 8.17 per cent from 8.49 per cent in the previous fiscal.
“We raised foreign currency resources and availed of refinance from Nabard (National Bank for Agriculture and Rural Development) and Sidbi (Small Industries Development Bank of India),” explains Sobti. It helped the bank improve its net interest margin to 3.71 per cent from 3.43 per cent in 2012-13.
Core fee income (commission, exchange, distribution of third-party products and earnings from foreign exchange business) soared 29.89 per cent to Rs 1,609.72 crore. This was critical for the bank in an otherwise dull year for credit.
IndusInd Bank also set up an investment banking division to supplement this revenue stream. “We don’t do big elephant deals. Debt capital markets, advisory, structured and project finance are what we like to deal in ,” says Sobti.
The bank has come a long way. In October 2009, a Mint Road draft paper on new private bank licences had alluded to IndusInd Bank as “one bank (that) has just about survived”. Five years earlier, it nearly got beached when Ashok Leyland Finance, a subsidiary of Ashok Leyland, also a Hinduja firm, merged with it. IndusInd Bank had to deal with a non-banking finance company with a different business model.
Cut to the present. Sobti recently met investors. What’s unusual about that, you may ask. Well, when he left ABN Amro Bank in 2008 to join IndusInd Bank, the latter hardly had any investor coverage. He has since raised Rs 4,000 crore in capital to fuel the IndusInd Bank growth story.
(This story was published in BW | Businessworld Issue Dated 29-12-2014)
Tags assigned to this article:
magazine raghu mohan indusind bank romesh sobti magazine 29 december 2014