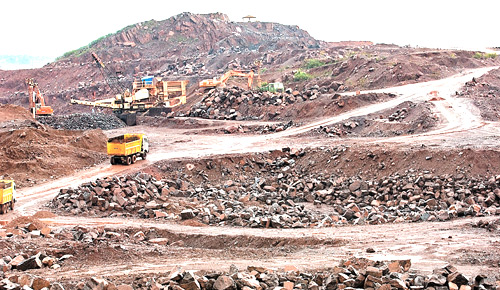 
The way forward, however, is not very difficult. According to Gopal Jain, a Supreme Court advocate and an expert on regulatory matters: "There is no harmony between government policy, regulation and contract...The government should formulate the broad policy in consultation with the regulator. After that the regulator should drive the process, set the rules and manage the entire process of pricing and utilisation."

So what are the critical issues that need to be addressed with regard to our natural resources? Let's take a look.

Spectrum
The online auction of third generation wireless spectrum was seen as a fair attempt at allocating this resource. The government earned more than Rs 67,000 crore, but the industry led by Bharti Airtel's Sunil Mittal complained that pricing had "taken the sheen off the telecom industry". However, it was a good effort at leveraging the value of a resource. Says Amir Pasrich, a Supreme Court advocate and infrastructure law expert: "If we can't safeguard assets by procedures and honest dealings, we must do so with the use of market forces..."

In contrast, the 2G scam and the subsequent cancellation of licences by the Supreme Court has only underlined the devastating impact of flawed policies on government and industry. "If auction is the way, then the government should ensure that it remains the consistent policy. Sure, policy matures and evolves with time. But this should not automatically mean that the previous pricing and allocation policy was illegal. Foreign investors are not happy with rules that change with retrospective effect," says the CEO of a global telecom company, requesting anonymity.

The major problem areas for policy makers, however, are the other natural resources: Land and water, and what lies beneath.

Land
The UPA government's Land Acquisition, Resettlement and Rehabilitation Bill has tried to address the problem of land valuation. It has led to stand-offs between industry and landowners and has stalled a number of projects. But, it has gaps. The law, for instance, has fixed the minimum price of land sold to private developers at twice its market value for urban areas and four times in rural areas. Also, it requires that at least 80 per cent of those living on that land should agree to sell. But the true market price of land rarely emerges in the face of rent ceilings, tenancy laws as well as Adivasi land laws. As a result, many state governments and industry leaders are upset with the law. For instance, Maharashtra says its target of acquiring 60,000 hectares for industrial usage will not be achieved because of the extra costs involved.

break-page-break
Minerals, Oil And Gas
There is a huge growth potential for India's $22-billion mining industry which contributes only about 1.9 per cent to the GDP as compared to Brazil, South Africa and Australia where mining's contribution is 5-7 per cent. But the government is doing little to help. The new Mines and Mineral Development and Regulation Bill requires coal companies to share 26 per cent of their profits with the local community and non-coal companies 100 per cent of their royalty. Says Mukesh Kumar, president and COO of Vedanta Aluminium: "The Supreme Court's formula is better. It has asked for 5 per cent of profit before tax to be invested every year in 50 km area of the plant. Also, a special purpose vehicle should be created to ensure that money is invested locally."

Then, there is illegal and environmentally damaging mining, which is preventing the right valuation and utilisation of minerals. "The government must get all environmental clearances, check the mineral resource available in a transparent way and then auction the sites,'' says Chandra Bhushan, deputy director general of Centre for Science and Environment. "If tasks are left to the bidders, they will find ways to navigate around the laws."

Fixing the right valuations of natural resources is a concern elsewhere, too. Says Mark Runacres, India adviser, Confederation of British Industry: "The valuation of natural capital is currently being explored by the UK government through its Natural Environment White Paper and through the resource efficiency roadmap at the EU level. The government is setting up two committees which relate to valuing natural capital."

Interestingly, the Federation of Indian Mining Industry, FICCI and CII have endorsed the auction method for areas where minerals have been identified. But the progress has been tardy. Of the 30,000 sq. km area that is believed to have bauxite, only 2,352 sq. km has been mined.

"There has to be more transparency in oil and gas prospecting too,'' says Bhushan. "There are too many claims and counter-claims on oil and gas field discoveries." What is needed is an independent regulatory mechanism to harvest this extremely valuable resource. The Directorate General of Hydrocarbons is a division of the petroleum ministry. And the Petroleum and Natural Gas Regulatory Board is not allowed to regulate production and exploration policies.

Both  bodies need to be strengthened and made independent.

Despite several rounds of exploration bidding, industry remains sceptical of the process. Also, taxation issues and inconsistent policy have kept foreign investors away. Production sharing contracts between PSUs (Public Sector Unit) and domestic and foreign corporations were hotly debated in the gas supply row between the Ambani brothers last year.

Development needs deep thinking and mature policies. The government has been collecting money to compensate people for taking away their land, but it has not been able to do enough with it. The Compensatory Afforestation Fund Management and Planning Authority under the Ministry of Environment and Forests has about Rs 15,000 crore of reserves yet to be invested in the people who need it.

Much of these economic policies will work if enough political ground work is done. If done well, the government could be looking at surpluses of a few  thousand crore of rupees and not deficits. It does not have to dig too deep for  rich solutions.