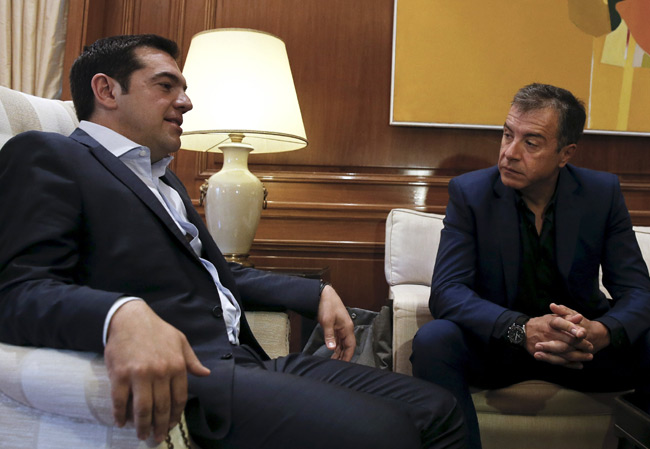 16 June, 2015
Print this article Font size -16+
Prime Minister Alexis Tsipras told opposition leaders on Tuesday (16 June) that disagreements among international lenders were to blame for an impasse in negotiations, sticking to a hard line that has brought Greece to the brink of default.
Financial markets, long undisturbed by the wrangling over releasing billions of euros of financing for Greece, reacted with mounting alarm, with European stock markets hitting their lowest level since February.
Yields on bonds issued by other vulnerable euro zone states leapt in one of the most aggressive episodes of contagion since the height of Europe's debt crisis in 2012.
Greece is set to default on a 1.6 billion euro ($1.80 billion) debt repayment to the International Monetary Fund on June 30 unless it receives fresh funds by then, possibly driving it towards the exit of the euro zone.
Both Athens and international lenders from the European Union, European Central Bank and IMF have dug into entrenched positions with each side blaming the other for the collapse of talks at last weekend.
Finnish Prime Minister Juha Sipila, whose country is among the most hawkish creditors, said it would take "a miracle" to reach a solution next week, but that was still everyone's aim.
Tsipras, who is due to address lawmakers from his own leftist Syriza party at 2 p.m. (1100 GMT), said it was crucial that a viable deal be struck. But he said resistance by European partners to accepting a writedown of part of Greece's debt was standing in the way of agreement, despite IMF pressure for restructuring.
"It is crucial to end this vicious cycle and not be forced into a deal which, in six months' time, will bring us back to the same point," he said.
Fears have grown that Greece is all but set to default by the end of the month, which could open the way for a euro exit and usher the single currency bloc into uncharted territory.
Officials denied a report in the Sueddeutsche Zeitung daily that preparations were underway for capital controls to be introduced as early as next weekend.
Talk of such drastic steps if no deal is reached was fuelled by a call by German EU Commissioner Guenter Oettinger on Monday to prepare for a "state of emergency".
Euro zone finance ministers will meet on Thursday to review the stalled debt talks. EU officials denied reports that any emergency summit of euro zone leaders was being planned for next Sunday. If anything, Eurogroup finance ministers might meet again.
"There should be no illusions that an agreement will become easier, or more advantageous over time or at the level of heads of state and government," said one euro zone official.
Close To Limits
In Athens, there was little sign of public panic but increasingly worried leaders of pro-euro opposition parties sought briefings from Tsipras and implored him to strike a deal swiftly to prevent an economic collapse.
"I called on the prime minister to consider that the Greek economy is desperately close to its limits," Stavros Theodorakis, leader of the centrist To Potami party, the fourth-biggest in parliament said after meeting the prime minister.
Tsipras had assured him there were still "two or three" steps Athens could take to break an impasse in talks with its lenders, provided the lenders also gave ground, Theodorakis said. The 17 lawmakers he commands would vote for any deal in parliament that kept Greece in the euro, he added.
Faced with a backlash from within his leftist Syriza party over concessions to lenders, the support of parties like Potami and the centre-left PASOK could prove crucial for Tsipras in voting through any deal struck with creditors.
Syriza, however, has ruled out such an option, saying an agreement must pass with the support of its own lawmakers.
Tsipras also met the new leader of PASOK as well as Dora Bakoyianni, a prominent figure of the conservative New Democracy party on Tuesday.
The meetings came as the euro zone continued to pile pressure on Greece to concede ground to avert default.
Michael Grosse-Broemer, a senior lawmaker in Chancellor Angela Merkel's conservative Christian Democrats (CDU), said a Greek exit from the euro zone would have to be accepted if Athens did not present a convincing reform package.
"I'm not so sure anymore if the Greek government is really interested in averting damage for the people of Greece," he said.
Austrian Chancellor Werner Faymann, due in Athens on Tuesday, said he had coordinated with European Commission President Jean-Claude Juncker before meeting with Tsipras on Wednesday and hoped to head off a Greek exit from the euro.
Faymann, a Social Democrat who has taken a relatively sympathetic line on Greece in its debt talks with creditors, reiterated that Athens must fulfill its commitments under its current rescue programme.
But he added: "We need a longer-term plan which is linked to conditions but also means... that whoever wants to invest in Greece knows he is investing in a country that will still have the euro a year from now."