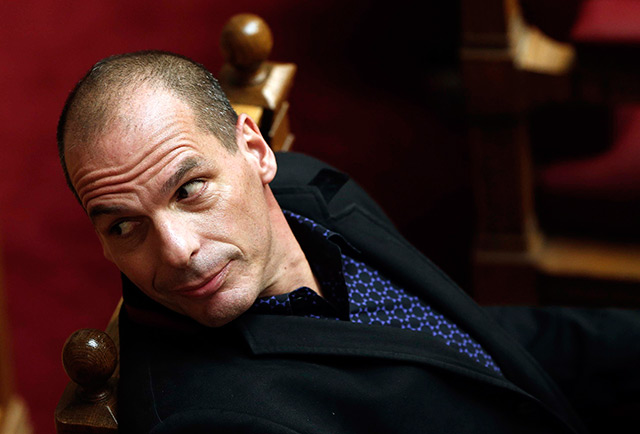 12 February, 2015
Print this article Font size -16+
Greek Finance Minister Yanis Varoufakis headed for a showdown with euro zone finance ministers on Wednesday after his new leftist-led government won a parliamentary confidence vote for its refusal to extend an international bailout.

The former academic said he was ready for a clash with euro zone paymaster Germany and its allies over Greece's determination to scrap austerity measures, end cooperation with the "troika" of EU/ECB/IMF officials overseeing the bailout programme and demand a "haircut" restructuring its debt.

"If a debt can no longer be paid off then that leads to a haircut," Varoufakis told German magazine Stern in an interview released on Wednesday. "What is critical is that Greece's debt cannot be paid off in the near future."

German Finance Minister Wolfgang Schaeuble has said that if Greece is not willing to request an extension of its 240 billion euro bailout - the biggest in financial history - "then that's it", ruling out further assistance or debt forgiveness.

He and other euro zone ministers said they wanted to hear Greece's ideas at a Eurogroup meeting beginning at 1630 GMT in Brussels, but they warned that time was short since the bailout programme expires at the end of this month and no solution is in sight.

Greek bond yields rose and shares fell before the meeting, with investors concerned that failure to reach a deal in the next couple of weeks could lead to a possible Greek default and exit from the euro currency.

However, most analysts said the odds were on an agreement emerging this month after lots of sound and fury.

"We are once again seeing a kind of chicken race between the new Greek government on one side and the 'troika' on the other," Swedish SEB Bank chief economist Robert Bergqvist said. "Our main scenario implies a compromise that will ease current financial market worries."

European Union leaders will take up the issue at their first summit with Greek Prime Minister Alexis Tsipras on Thursday. EU officials said they would be briefed on the talks but there would be no room for debt negotiation at a summit mostly devoted to the Ukraine-Russia conflict, fighting terrorism and longer-term reform of the euro zone's governance.

Tsipras struck a defiant tone in parliament late on Tuesday, saying that "little Greece" was changing Europe by casting off austerity.

"We are not negotiating the bailout; it was cancelled by its own failure," the leader of the hard left Syriza party declared before winning the confidence vote with the backing of 162 lawmakers in the 300-seat chamber. "I want to assure you that there is no going back. Greece cannot return to the era of bailouts."

Tsipras agreed on Wednesday to work on reforms with the Organisation for Economic Cooperation and Development, a Paris-based inter-governmental think-tank, but said they would not be imposed from outside.

OECD chief Angel Gurria appeared to endorse Tsipras's criticisms of the bailout programme after they met in Athens, saying it had produced low growth, high unemployment, rising inequality and a loss of trust.

Varoufakis has proposed a six-month transition in which Greece would be allowed to issue more short-term debt, receive the proceeds of ECB holdings of Greek bonds and tap unused bank rescue funds while renegotiating its debt. Athens would swap its euro zone loans for GDP-linked bonds and its ECB-held debt for interest-bearing perpetual bonds with no reimbursement date.

EU officials have said the most Greece can expect is a further extension of the repayment deadline for its euro zone loans, a lower interest rate and perhaps a prolonged moratorium on debt service payments, in return for continued reforms under some form of external supervision.

Irish Finance Minister Michael Noonan, whose country emerged successfully from its own EU/IMF bailout in 2013 and now has the highest growth rate in Europe, said he was pessimistic about Wednesday's talks and accused the Greeks of double-speak.

"I don't see the basis for a solution emerging yet," Noonan told a parliamentary committee in Dublin. "Many of the proposals that are emanating are, on the face of it, technically impossible."

He said Tsipras and Varoufakis had said different things to their domestic and European audiences.

Austria's finance minister, Hans Joerg Schelling, said he thought a solution could be reached by the end of February if Greece wanted, otherwise things would enter a "critical phase".

"We again have a situation now in which money is being withdrawn from Greek banks. We have a situation that certain debts may not be able to be serviced, and that is of course a critical phase because the reaction on financial markets would be enormous," he told ORF radio.

Greek ministers have talked of possibly turning to Russia or China for assistance if there is a deadlock with the euro zone.

Tspiras discussed deepening cooperation and investment in a telephone call with Chinese Prime Minister Li Keqiang, a Greek government official said. A Chinese Foreign Ministry spokeswoman said she was not aware of any offer of aid to Athens.

Foreign Minister Nikos Kotsias held talks in Russia on Wednesday but there was no mention of financial assistance from Moscow at a joint news conference with his Russian counterpart.

The new government meanwhile confirmed that it has halted plans to privatise the main ports of Piraeus and Thessaloniki, in which China's Cosco had been a contender.