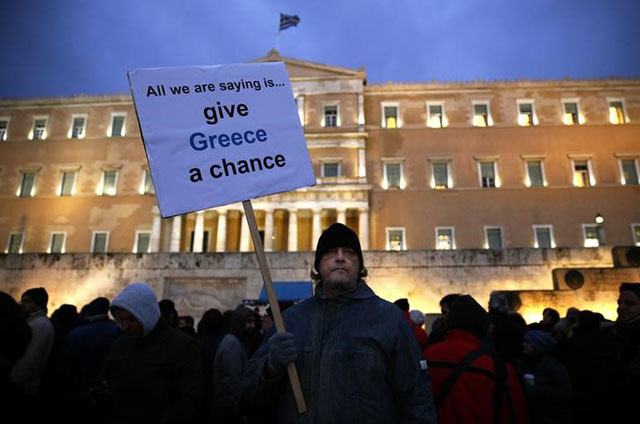 04 May, 2015
Print this article Font size -16+
Negotiations between Greece and its international lenders over reforms to unlock remaining bailout aid have made headway and an agreement could be closer this month, a government official said on Sunday.
Prime Minister Alexis Tsipras's three-month-old government is under growing pressure at home and abroad to reach an agreement with European and IMF lenders over reforms to avert a national bankruptcy.
Talks have been painfully slow as the leftist-led government is resisting cuts in pensions and labour reforms that would clash with its campaign pledges to end austerity.
"There were very important steps made at the Brussels Group (talks) which bring an agreement nearer," the official said, declining to be named.
"All sides aim for an agreement at a Brussels Group level within May."
The talks between technical teams from Athens and EU/IMF/ECB lenders are expected to resume on Monday, the official said after the country's chief negotiators met with Prime Minister Alexis Tsipras.
A euro zone official also said there was convergence on some issues but sticking points remained and that talks were expected to continue through Wednesday.

*
Athens hopes that a successful conclusion of the negotiations at the so-called Brussels Group could lead to recognition of the progress by the Eurogroup of euro zone finance ministers and bring some liquidity relief.
(Reuters)
Tags assigned to this article:
news 8 world eu imf greece bailout