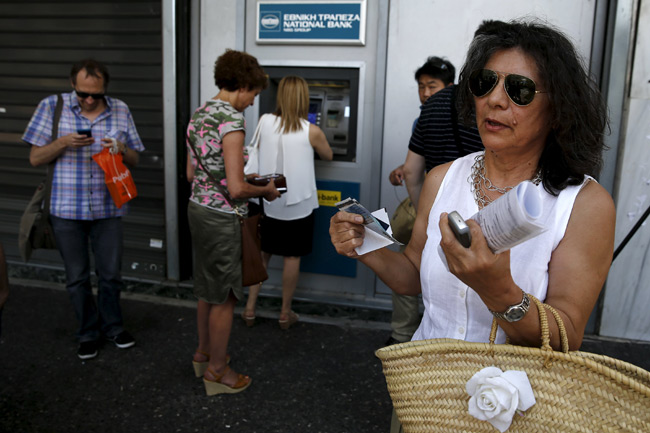 29 June, 2015
Print this article Font size -16+
The financial markets continued to remain volatile the whole of Monday (29 June) amidst possibility of a Greek debt default, just a day before the deadline for Greece to repay a part of its debt to the International Monetary Fund. The Sensex plunged close to 600 points in the opening trade, but recovered from the early lows as the day progressed and finally closed at 27,645.15, down -166.69 points or -0.60%. Nifty on the other hand shed 62.70 points to close at 8,318.40.
Even as fears loomed large over Greece likely to default on its debt, market experts cautioned that the more serious concern is the nation crashing out of the euro zone. “Currently, about 25 per cent of the aggregate forex held by all central banks is Euro denominated. So, if the euro becomes volatile, it will certainly have an impact on the Indian market,” said Jagannadham Thunuguntla, Head of Fundamental Research at Karvy Stock Broking Limited.
Fearing capital outflows, Finance Secretary Rajiv Mehrishi said the government is in touch with the Reserve Bank which will take necessary steps to deal with the issue.
The Greece issue has led to subdued sentiments globally. Stock markets in Europe and Asia, among others, saw a fall after widespread selling by investors as well as funds. “Last whole week, global markets were expecting Greece and EU to arrive at a mutually acceptable solution. Weekend announcement of Referendum has created uncertainty. Street is more worried about the contagion effect on other countries like Portugal, Spain and Italy,” said Nilesh Shah, MD at Kotak Mutual Fund.
From the India point of view, experts say our markets will witness little lower volatility than its peers as we are not as much impacted from the unfolding events in Greece and EU. However, certain stocks such as those in IT, pharma and auto anciliaries that have having significant exposure to Euro are likely to underperform.
Finmin Fears Capital Outflows, In Touch With RBI
Worried that the Greek crisis may trigger capital outflows, Finance Secretary Rajiv Mehrishi today said the government is in touch with the Reserve Bank which will take necessary steps to deal with the issue.
"Obviously we are in touch with the RBI but they will do what they have to do," he told reporters here as uncertainty over Greece pulled down the BSE index, Sensex, by over 500 points in early trade though it recovered in the afternoon.
The situation in Greece has no direct impact on India, he said but added that there may be some indirect effect via Europe on capital inflows and outflows here.
"Greece crisis does not have any effect directly on India.
(But) interest rate may firm up in Europe. In case of firming up of interest rate in Europe, there can be outflow of capital from India," he said.
Terming the situation as dynamic and evolving, he said, the crisis may have an indirect impact on India by way of its outcome on the European currency euro.
"To the extent it affects the euro, there might be some indirect impact on India. If yields on euro bonds go up, then it might impact inflows and outflows from India," he said.
Mehrishi said nobody can predict how the situation will evolve.
Asked if any Indian company has an exposure in Greece, he said, "I don't know."
"If yields on G-Sec go on in the US, then it might impact inflows and outflows in India. We really don't know how they (foreign investors) will relocate their portfolio," he added.
Tags assigned to this article:
greece fallout greece bailout indian stock markets jagannadham thunuguntla nilesh shah Finance Secretary Rajiv Mehrishi