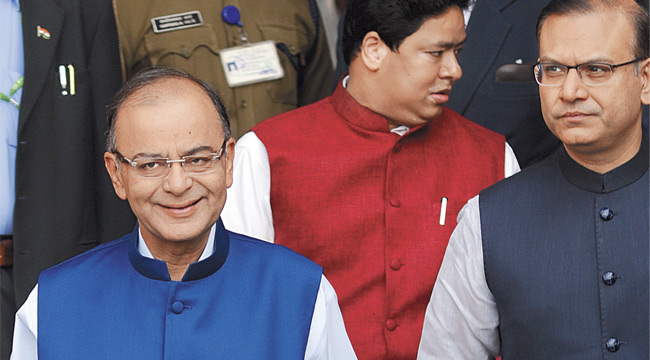 10 March, 2015
Print this article Font size -16+
For most people who expected a 1991-like Union Budget, finance minister Arun Jaitley’s budget for 2015-16 (FY16) may have been a bit of a disappointment. In the build-up to February 28, media coverage almost trumpeted landmark reforms, some ‘Big Bang’ announcements and sweeping changes: there were none. In the end, it turned out to be a Budget underlined by pragmatism and grounded in economic realities. Which is not a bad thing.
Jaitley’s speech itself was rather economical: he spared his listeners and television viewers the tedium of sitting through a recounting of the details of new government schemes. Instead, he focused on the big picture: what it would take to put India’s economy back on a strong and sustainable growth trajectory. In all, his speech took about an hour and a half, laced with enough detail to keep everyone interested (of course, this was arguably the most anticipated Budget in recent years).
The political messages in the Budget were well conceived and targeted: the tax rules weren’t changed, so revenue would not be foregone, but future direction was clear. Leave more money in the hands of citizens (encouraging savings), create a better environment for business, industry and job creation (reduction in corporate income tax over four years), make no compromises on social welfare (Jaitley even said he would increase contributions to the National Rural Employment Guarantee Scheme, the previous government’s legacy), and do all of this while maintaining fiscal health.
At the same time, recall that finance ministers take great pains to remind everyone that the Budget is basically about government accounts for the current year, and a business plan for the next. Jaitley was no exception. Yet, his Budget was a context-setting one, presenting a framework against which to assess government performance and what might be expected in the Budgets of the next four years. The big question: how is he going to do it all?

The Fiscal Math: A Windfall?
While Jaitley has achieved the FY15 fiscal deficit target of 4.1 per cent of GDP — through a combination of reduced expenditure and the PSU disinvestment programme — he recalibrated the goals of fiscal consolidation. The fiscal deficit target for FY16 is 3.9 per cent (originally 3.6 per cent), for FY17 3.5 per cent; in the FY18 Budget, fiscal deficit will be 3 per cent of GDP. The Fiscal Responsibility and Budget Management Act will be suitably amended.
Lower capital spending in FY15 is how Jaitley reached his 4.1 per cent fiscal deficit target. So he’s giving back in FY16 what he couldn’t in FY15. The actual increase of about Rs 50,000 crore in capital expenditure in the FY16 Budget over the FY15 revised estimates works out to an increase of a shade below 7 per cent. It also matches the fiscal space of 0.3 per cent of GDP that the FM has carved out by keeping the deficit at 3.9 per cent of GDP. As the finance minister pointed out, public investment in capital stock will have to lead the way, by investing in infrastructure until the private sector is ready to do its bit.
On the face of it, plan expenditure (think of it as a proxy for capital investment) for FY16 is mammoth. Compared to the FY15 numbers, that seems like a rather substantial 25 per cent increase, but look closer. Revised estimates for plan expenditure (Rs 1.924 lakh crore) in FY15 were lower — by Rs 33,400 crore — than the original FY15 Budget estimates of Rs 2.258 lakh crore.
Jaitley has been lucky as well; the fall in global crude oil prices has helped his cause, and per force cut the government’s subsidy bill. His FY16 growth estimates and the predictability of his expenditure plans will depend on oil prices staying as low as they are currently.

The Public Interest
Over the last few years, the national savings rate as a percentage of GDP has declined to less than 30 per cent, and for the investment cycle to kick in, household savings — the mainstay of gross savings — will have to go up. It’s an article of economic faith that the best way of cutting the deficit is by raising the national savings rate.
Not surprisingly, Jaitley has announced changes to income tax rules that are expected to boost household savings. He has increased the amount exempted from income tax to about Rs 4.4 lakh — by increasing the ceiling in provident fund schemes by Rs 50,000 (from Rs 1.5 lakh), and granting 100 per cent exemption (up to Rs 25,000) in health insurance, besides raising the exemption limit for transport allowance to nearly Rs 20,000 a year.
In the biggest boon to the corporate sector — and to raise its savings rate and its profitability — Jaitley’s budget announced a phased decrease in corporate income tax to 25 per cent over the next four years. Business leaders and industrialists are enthused over his approach.
But the reduction in corporate income tax will be accompanied by phasing out of the many exemptions in the current tax rules. Ultimately, the measure will be revenue neutral: as Jaitley pointed out, the effective corporate tax rate is 23 per cent. However, to borrow from the economist’s lexicon, there are no free lunches.

Event Risks
The Budget is predicated on two things: that global oil prices will remain at the present level of $50-60 a barrel, and the investment cycle will revive; both factors are interdependent. Low oil prices will continue to extend the windfall in terms of a lower subsidy bill, and public spending on infrastructure will ‘crowd in’ private sector investment.
According to some experts, the current stability in low oil prices can’t be taken for granted. In the last few weeks, oil prices have become volatile. Global oil analysts suggested that the volatility would accompany some upward movement, perhaps to $70-80 a barrel. That means Jaitley may have to reconsider his assumptions.
In FY16, the Seventh Pay Commission’s report will be presented and negotiated. The Sixth Pay Commission cost the government Rs 40,000 crore in the first year, and Rs 20,000 crore in each of the next three years. It’s not clear whether Jaitley has accounted for this; even if the increased salaries and benefits don’t become applicable in that year, prudence demands that they to be accounted for.
In earlier speeches, Jaitley has talked about the advantages of cooperative rather than competitive federalism. In his Budget, he has suited action to word. In the run-up to the actual Budget announcement, the government accepted the 14th Finance Commission’s recommendation to increase the states’ share of taxes from 32 per cent of central tax revenues to 42 per cent.
Add central grants and other forms of assistance, and the states receive well over half of all central tax revenues. That gives states greater say in spending priorities, which may well be a good thing. But if tax revenues don’t meet expectations, the risk of spending cuts on social welfare schemes in some states can be high. That might militate against the “Budget for All’ message of the government.
As many experts pointed out, the critical challenge is delivery. The government is not likely to forget the lessons from the Delhi polls, is aware of upcoming elections in five key states, including Bihar and West Bengal, and has no doubt heard corporate leaders’ reservations. For Jaitley and the government, the clock has started ticking.
(This story was published in BW | Businessworld Issue Dated 23-03-2015)
Tags assigned to this article:
srikanth srinivas magazine arun jaitley union budget 2015 magazine 23 march 2015