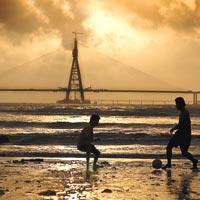 08 November, 2014
Print this article Font size -16+
India's boldest attempt in two decades to sweep away the remnants of the "License Raj" permit system that has crippled infrastructure development has fallen victim to the very scourge it was designed to defeat.
A proposal for a government panel chaired by Prime Minister Manmohan Singh to fast-track major infrastructure projects and boost a flagging economy seems to have stalled amid bickering between the finance and environment ministries over its powers, and an apparent reluctance to proceed without consensus.
The dispute underscores the fears of investors and business leaders that New Delhi's new-found reformist zeal could be undone by a lack of governance and political will to drive further economic liberalisation.
The brainchild of Finance Minister P. Chidambaram the proposed National Investment Board (NIB) was expected to win swift passage through the cabinet last month. But it has yet to make it on to the weekly agenda.
Investors and economists say the NIB should be a top priority for the government given the regulatory delays holding up projects worth nearly 2 trillion rupees in the road, power, coal and mining sectors alone.
"NIB, NIB, NIB," Rajiv Lall, managing director of infrastructure financing firm IDFC Ltd told Reuters on the sidelines of a World Economic Forum meeting last week, when asked what reforms the government needed to carry out next.
The NIB aims to provide a single-window clearance for large projects that today are bounced from one ministry to another for various approvals, a process that can some times take years.
However, the Environment Ministry opposes the NIB, fearing that it will not only undermine its authority but also weaken the system of checks and balances within the government.
"This current proposal is completely unacceptable as it will decimate the role of individual ministries in taking responsible decisions," Environment Minister Jayanthi Natrajan said in a letter to the prime minister that was leaked to media.
The ministry has blocked several high-profile industrial and infrastructure development projects. Natrajan's influence comes from her perceived closeness to Sonia Gandhi, the powerful chief of the ruling Congress party, who favours populist policies.
The tussle reflects India's struggle to balance the need to foster economic growth with a desire to protect the environment.
Poor infrastructure is often cited by economists as one of the biggest obstacles to more robust economic growth.
Turf War
A typical infrastructure project requires clearances from 19 federal ministries and on an average 56 permissions on issues ranging from the environment to defence. The whole process takes up to 24 months.
Now, the NIB faces a similar set of bureaucratic hurdles.
"Any decision to take place which has implications for a very large number of ministries, you need to have inter-ministerial discussions and create a consensus," said Arvind Mayaram, economic affairs secretary at the Finance Ministry.
He said a decision could be taken within three weeks.
Government officials said the prime minister's office had asked the Finance Ministry to revise the proposal after failing to broker a compromise between the two ministries.
"We are hopeful that it will eventually get resolved. They (the Environment Ministry) seem to have misunderstood the structure," said a Finance Ministry official, declining to be named. "They should understand that the interests of the country are far more important than the concerns for their turf."
The Environment Ministry declined to comment.
The turf war between two ministries reinforces a frequent criticism of Singh - that he has poor control over his ministers. Such squabbles in the past forced him to defer important decisions related to the economy and national security.
"I hope the same fate does not fall to my proposal for a National investment Board," Chidambaram lamented recently.

DICGC To Pay Depositors Of Two Co-Operative Banks In August