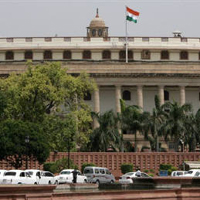 08 November, 2014
Print this article Font size -16+
With an eye on the Lok Sabha polls, the government will try to push the Food Security Bill and Land Acquisition Bill as soon as Parliament meets for Monsoon Session on August 5.

Sources said the government is likely to list these two bills in the agenda of the business of the very first day of the session.

"These are the two key policy measures we are trying to push," a source said.

The government sees the Food Security Bill, which will provide right to subsidised food to 82 crore people, as a game changer in the 2014 elections.

It has pushed through an ordinance to implement the food security measure early this month.

The bill proposes to provide 5 kg of rice, wheat and coarse grains at Rs 3, Rs 2, Rs 1 per kg respectively, every month to three-fourths of rural population and half of the urban population in the country.

Several parties including Samajwadi Party, which extends outside support to the government and BJP are opposed the measure.

Finance Minister P Chidambaram on 16 July expressed the hope that the opposition would help ensure its passage in the coming session of Parliament. He rejected the criticism that the ordinance was brought in a hurry.

There is no question of taking political mileage on the issue, Chidambaram said.

He has noted that the bill, which seeks to provide fair compensation to the farmers with adequate safeguards, has gone through "unprecedented all-party efforts".

Ramesh has also said that two "crucial amendments" suggested by Leader of the Opposition in Lok Sabha Sushma Swaraj have been incorporated "in toto to her satisfaction".

A broad consensus was reached among political parties during the recess period of the Budget Session in April over the much-awaited bill after the government gave in to a key demand of BJP for 50 per cent compensation to the original farmers whose land has been purchased after the introduction of the bill in Lok Sabha in September 5, 2011.

The government has also agreed to another demand of BJP, which had suggested that instead of acquisition, land could be leased to developers so that its ownership will remain with the farmers and will provide them with regular annual income.