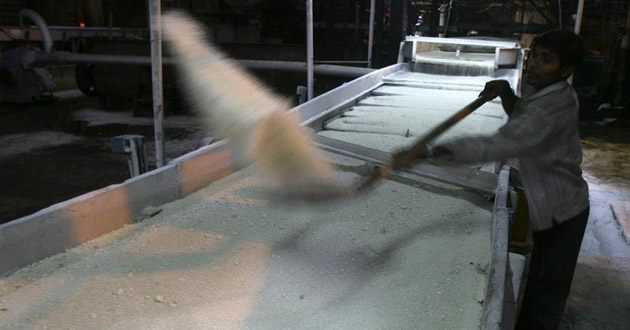 08 November, 2014
Print this article Font size -16+
India, the world's biggest sugar consumer, raised the import duty on the sweetener to 25 per cent from 15 per cent as part of efforts to help regional mills struggling with lower prices and higher stocks.

A rise in the duty will make imports unviable for port-based refiners despite a plunge in global prices due to ample supplies from top exporters Brazil and Thailand.

In June, Food Minister Ram Vilas Paswan had said the import duty could be raised to 40 percent from 15 percent if mills pay farmers' dues, estimated at nearly 50 billion rupees.

Mills say a 70-per cent jump in the price that they have to pay to farmers in the biggest cane-growing state of Uttar Pradesh and a meagre 7 per cent rise in sugar prices have worsened their finances, leading to cane dues.

"There was an import parity but mills were not signing deals, expecting revision in the import duty. At 25 percent duty, imports are not viable," said a Mumbai-based dealer with a global trading firm.

In the current sugar year to September, India is likely to import just 30,000 tonnes compared with 680,000 tonnes a year earlier, an industry official told Reuters earlier this month.

The benchmark sugar futures in India rose 1 per cent after the increase in the duty, while shares of sugar makers such as Bajaj Hindusthan Ltd, Shree Renuka Sugars Ltd and Balrampur Chini Mills Ltd rose more than 4 percent.

"The duty will certainly support prices, but local prices are unlikely to jump. Supplies are adequate," said Ashok Jain, president of the Bombay Sugar Merchants Association.

Prices in India, the world's biggest producer after Brazil, fell below the cost of production in some states as the south Asian country produced surplus sugar for the four straight year.

Even in the next year starting October, the country's output is likely to jump 4 per cent to 25.3 million tonnes because of higher cane yields in Maharashtra and Karnataka.