Govt Puts Up Brave Front As SP Keeps It Guessing 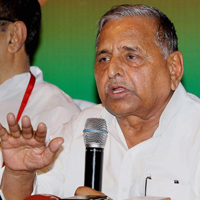 08 November, 2014
Print this article Font size -16+
Refusing to be on the back foot despite DMK's withdrawal, the government on Wednesday, 20 March 2013, asserted that it is "absolutely stable" and "not a lame duck" amid BSP's promise to stand by the UPA even as Samajwadi Party (SP) kept it guessing.

The prospects of a snap election may be still remote as the government needs time to implement flagship welfare schemes, but SP kept the government on tenterhooks on 20 March demanding resignation of Union Minister Beni Prasad Verma for his controversial remarks against party chief Mulayam Singh Yadav.

The UPA government also said India will move amendments to the US-piloted resolution on Sri Lanka at UNHRC to send a "resolute message" on that country's human rights and was working to bring a resolution to be adopted by Parliament here, the two demands set by DMK.

A day after DMK gave a letter to President Pranab Mukherjee withdrawing support to UPA, the government fielded three senior ministers -- P Chidambaram, Kamal Nath and Manish Tewari -- before the media to insist that all was well and questioned DMK for changing its position within 24 hours even while its demands were in the process of being considered.

The UPA's second biggest constituent with 18 Lok Sabha MPs quit the alliance on 19 March and its five representatives in the Council of Ministers submitted their resignations to Prime Minister Manmohan Singh today.

DMK is second party to leave the UPA. Earlier Mamata Banerjee-led Trinamool Congress had quit the UPA last year on the issue of FDI in multi-brand retail.

The withdrawal of the Dravida Munnetra Kazhagam (DMK) has rattled markets, which are worried that it has left Prime Minister Manmohan Singh unable to pass reforms needed to turn around the worst economic slowdown in a decade.

DMK ally VCK, with one member in Lok Sabha, also quit UPA. With the exit of DMK and VCK, UPA is left with the support of 284 members in the 543-member House.

Chidambaram and Kamal Nath rejected any impression that the government has become "weak" after DMK's pullout.

Neither 'Lame' Nor 'Duck'
"The government is neither lame, nor duck. It is not lame duck. We are absolutely, absolutely stable. If there is any test, it is on the floor of the House. But no political party has come out to challenge our majority," Nath, the Parliamentary Affairs Minister, told the press conference.

Finance Minister Chidambaram, while acknowledging "challenges" in running a coalition government, said, "it is our duty to steer the ship through the maelstrom and our hands are firmly on the wheel."

Putting up a brave front, Chidambaram said, "Just because one ally pulled out, the government has not become weak...

There is no political instability or political uncertainty...

Nobody has questioned our stability except for few voices in the media."

Asked whether the government will test its stability by going in for confidence vote, he said, "The question does not arise as we have the majority."

DMK made it clear that it has no intention to bring any no-confidence motion.

Meanwhile, UPA's outside supporter BSP promised its continued backing to the government.

Another outside supporter Samajwadi Party, however, created suspense, with its chief Mulayam Singh saying the Parliamentary Board will meet tomorrow morning to take a view.

At the same time, SP leader Ram Gopal Yadav created a stir by praising former NDA government for having "more cohesion" and Atal Bihari Vajpayee's style of functioning while attacking the leadership of Manmohan Singh.

UPA constituent NCP expressed confidence that the government would be able to wriggle out the present situation.

Rejecting the impression that the UPA is now weaker and "on more crutches", Chidambaram said, "We are in the government. It is our duty to steer the ship through the maelstrom and our hands are firmly on the wheel."

After DMK pullout, speculation has mounted that the UPA will be vulnerable to pressures from SP and BSP.

Reiterating that there should be "no doubt" about the government's stability or any "worry", Kamal Nath said it will continue with its policy decisions.

Asked whether the Congress would try to rope in some other parties, Nath said in politics, doors are always open

SP Keeps Govt On Tenterhooks
After the DMK pull out, the Samajwadi Party, a key outside supporter, today kept the government on tenterhooks demanding resignation of Union Minister Beni Prasad Verma for his controversial remarks against party chief Mulayam Singh Yadav.

Not happy with Verma just expressing regret for his remarks, Yadav met Prime Minister Manmohan Singh and later had an interaction with Congress chief Sonia Gandhi, who was seen talking to him with folded hands in the Lok Sabha after the House had adjourned.

A grim-looking Yadav said he has convened a meeting of SP MPs tomorrow at 9 AM. "We will hear their views and then decide," he told reporters while leaving Parliament on being asked his party's stand after Verma's regret. SP has 22 MPs in the Lok Sabha.

As Congress leaders made desperate attempts to placate Yadav, the SP chief met NCP chief Sharad Pawar, fuelling speculation of political realignment at a time when the buzz of mid-term poll gains ground.

Both the leaders, however, played down the meeting, saying they had met to discuss modalities of a programme they have to attend together on March 24.

The meeting of the two leaders comes in the backdrop SP demanding the resignation of Verma and the DMK ruling out a reconsideration of its stand on withdrawing support from the government.

Besides SP, BSP with 21 Lok Sabha MPs is among the crucial outside supporters totalling 57.