Govt Had To Take Tough Decisions On Petro Products: PM 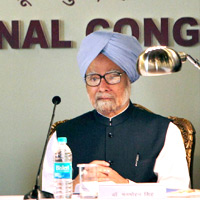 08 November, 2014
Print this article Font size -16+
Prime Minister Manmohan Singh justified recent "difficult" decision to hike prices of petroleum products and asked Congress cadres to have confidence in these measures arguing these were necessary. "We have to make all out efforts to change the conditions that affect the rapid growth of the country's economy," he said addressing a dialogue meeting of top Congress leaders in this picnic town on the outskirts of the national capital.
The prime minister highlighted reducing the fiscal deficit, tackling the subsidy bill on food, petroleum products and fertilisers, infrastructure development and spurring farm growth as key challenges before the country. He pointed out that the fiscal deficit, which was reined in at 2.5 per cent of the GDP in 2007-08, rose to 5.76 per cent in 2011-12.
"High fiscal deficit can have very negative impact on the country. This can lower the confidence in our economy. Domestic and international investments would trickle down. Economic growth would slow down leading to unemployment and increase in poverty," Singh said in a blunt and frank assessment of the economy.
Singh said government had to take certain tough decisions regarding petroleum products but had taken care to ensure that the poor and weaker sections were least affected. "This is the reason why we have not hiked the prices of kerosene," Singh said.
He listed Right to Education, mid-day meal scheme, skill development mission, rural jobs scheme among significant achievements of the government. "We have to bear in mind that the resources needed for these measures have been made available because of rapid economic growth," he said.
Singh expressed confidence that the government's "good economic policies will give strength to good politics".
"The need is that we keep confidence in ourselves and work hard unitedly and dedicatedly," he said at the same adding that despite the economic constraints, the flagship programmes for the welfare of the people will continue unaffected.
The Prime Minister's refrain was that there was a "need for better climate" for investors, both domestic and international, as greater investment has a direct bearing on economic development.
Apparently with the controversy over FDI in retail on his mind, he said it would be better that in this task of national importance, the government should get cooperation from state governments, political parties and civil society. "But our efforts in this regard have not been successful fully," he rued.
Listing agriculture sector as one of the key challenges, Singh said minimum four per cent growth was necessary to ensure food security.Singh said government's efforts had paid off in the farm sector which has clocked 3.3 per cent growth in the 11th Plan as against 2.4 per cent in the 10th Plan.
"We have to re-double our efforts in the future," he said. He said lack of infrastructure was one of the impediments in the country's growth. Singh said that in the last eight years, the government had made efforts to improve roads, electricity, airports, ports and railways and have set targets for the future.
According to estimates, investments to the tune of Rs 50 lakh crore were required in the 12th Plan to meet the targets set for infrastructure sector and there was a need to rope in the private sector through public-private partnerships.
(PTI)
Tags assigned to this article:
economy inflation news 3 farm growth growth prime minister manmohan singh gdp fuel price hike agriculture infrastructure fiscal deficit petrol prices fdi in retail petroleum products diesel price hike