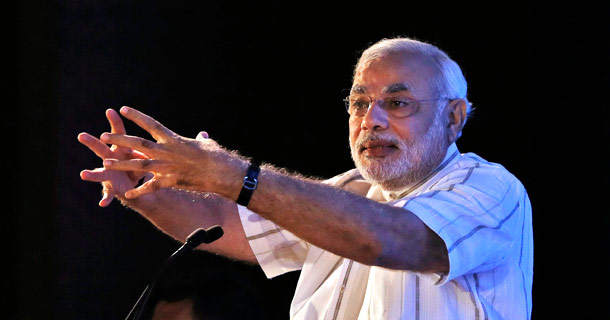 08 November, 2014
Print this article Font size -16+
Hot on the heels of a stiff opposition from allies, the government on Monday (5 May) decided to drop its move to name a judge to head the Commission set up to probe the snooping of a young woman by Gujarat police allegedly at the instance of Chief Minister Narendra Modi.
"We have left the decision on appointing a judge to the next government," government sources said a day after two UPA constituents NCP and National Conference openly opposed the move in the "dying days" of UPA-II.
A controversy had broken out last week when senior ministers--Kapil Sibal (Law) and Sushilkumar Shinde (Home)-- told the media that a judge would be named into the surveillance, which was dubbed as 'snoopgate', before May 16 when the counting of votes in the Lok Sabha elections will be taken up.
The announcement came under severe attack from the BJP which slammed the UPA saying it was practising vendetta out of desperation of defeat in the elections.
BJP questioned the move now saying the original decision of the Cabinet was taken in December and they could not decide on a judge all these days.
The party also questioned the need for such a probe when the state government itself had ordered a commission of inquiry into the same subject.
However, what apparently took the government by surprise was the opposition from its allies. Yesterday, NCP leader Praful Patel had said: "When the results of the Lok Sabha elections are due in two weeks' time, where is the need for such an enquiry."
Significantly, NCP chief Sharad Pawar had talked to Prime Minister Manmohan Singh yesterday to convey the party's view in the matter. NCP is the second largest constituent of the Congress-led UPA.
Striking a similar note, National Conference leader and Jammu and Kashmir Chief Minister Omar Abdullah said if the decision to appoint a judge could not be taken in December, then it was wrong to appoint a judge five months later.
"Was talking to my dad last night and he felt the same way-setting up a commission of inquiry in the dying hours of UPA 2 is just wrong.
"If the decision to appoint a commission was taken in Dec it should have been implemented. To appoint a judge 5 months later is wrong," Omar tweeted.
It was alleged that illegal surveillance was carried out on a young woman architect in Gujarat in 2009 at the behest of Modi and Amit Shah, who was the Home Minister at that time.
Unfazed by the opposition from its two allies, Congress spokesperson and Mahila Congress chief Shoba Oza had said there was "no compromise" on going ahead with the probe as the matter does not involve any political party, but women of the country who constitute half of the population.
(Agencies)
Tags assigned to this article:
politics top 1 bjp narendra modi upa ncp 2014 elections snoopgate national conference