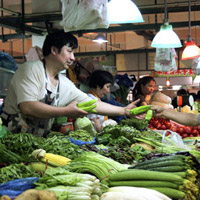 08 November, 2014
Print this article Font size -16+
The government is considering calling a special session of parliament to pass a $24 billion welfare scheme to give cheap food to the poor, the finance minister said on Thursday, a move clearly aimed at public opinion ahead of a general election.

Mired in corruption scandals that have paralysed parliament, the Congress party-led ruling coalition earlier flirted with the idea of introducing an executive order to implement the programme, aimed at providing ultra-cheap food to about 800 million people.

The food security law is a pet project of Congress party chief Sonia Gandhi, who led the party to victory in the last two elections on the back of similar populist programmes, such as a rural jobs plan and a $12.5 billion farmer loan waiver passed just before the 2009 general election.

"Our intention is to get it passed in a special session of parliament and we are making one more effort to ask the opposition parties to support us," Finance Minister P. Chidambaram told reporters.

At a cabinet meeting chaired by Prime Minister Manmohan Singh on Thursday, many ministers argued that a debate, broadcast live on television, would give the scheme more publicity than getting it ratified through an executive order, sources present at the meeting told Reuters.

A debate would help placate the main opposition Bharatiya Janata Party (BJP), whose support is crucial for getting the bill through parliament, they said.

Most political parties, including the BJP and government allies, support the bill in principle, but want it passed in parliament rather than by an executive order.

The programme aims to provide subsidised wheat and rice to 70 percent of India's 1.2 billion people. The country is home to 25 percent of the world's hungry poor, according to a U.N. agency, despite being one of the biggest producers of food supplies.

But critics said despite the extra spending, beneficiaries do not stand to gain, as about 40 percent of rice and wheat earmarked for the poor gets siphoned off due to corruption. An inefficient distribution channel also leads to waste.

Providing rice and wheat at a fraction of cost could strain government finances with a hefty food subsidy bill -- estimated to rise by 45 percent after parliament approves the legislation -- and could further widen a ballooning fiscal deficit.

The scheme, when implemented, will massively broaden an existing programme of providing cheap food to 218 million people. Critics say it is a wasteful use of public finances during an economic slowdown.

India, sitting on unmanageable stocks of rice and wheat, has already allowed exports to help trim bulging stocks. But wheat exports have been slow due to a high floor price.