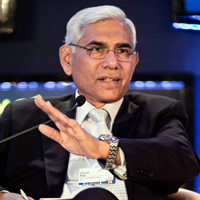 08 November, 2014
Print this article Font size -16+
After the flop 2G spectrum auction that yielded only Rs 9,407 crore, the Indian government and the Congress on 15 November questioned the Comptroller and Auditor General's estimated loss of Rs 1.76 lakh crore in the spectrum allocation of 2001, drawing fire from the opposition.

India's Information and Broadcasting minister Manish Tewari led the government attack by asking CAG Vinod Rai as to why the spectrum auction had not yielded anything close to the loss it had estimated.

"Mr CAG, where is the 1.76 lakh crore? I think it is time for some serious introspection. Its time the CAG introspects on his processes and it is high time that the BJP and some of the other opposition parties, which had made this their holy grail and swansong of politics over the last two years, should publicly apologise," Tewari said while speaking to reporters.

Congress leader Digvijay Singh also took a dig at the national auditor's estimate of loss in the 2G spectrum allocation in 2001.

"The CAG should reconsider how far its estimate was right with regard to the report, which it had earlier given and the losses that it had computed (in spectrum allocation two years ago)," Singh said.

Bharatiya Janata Party hit back at the government.

"Government keeps looking for ways to attack constitutional institutions like the CAG which are acting in a fair and independent manner," party vice president Mukhtar Abbas Naqvi said.

Singh sought to dismiss the suggestion that the auction yielding less revenue this time is a reflection of disenchantment of telecom companies with the government.

The government was targeting a minimum of Rs 28,000 crore from the sale of 2G spectrum in the GSM band and the tepid response may upset its efforts to meet the revised fiscal deficit target of 5.3 per cent of GDP.

Overall, the government had budget Rs 40,000 crore as revenue from spectrum sale this fiscal.

The CAG had in 2010 said the then Telecom Minister A Raja's decision to give away spectrum at rates fixed in 2001 had caused a presumptive loss of Rs 1.76 lakh crore to the exchequer.

CPI-M's Nilotpal Basu also lashed out at the government gunning for the CAG.

"If the government argues like that, it will only be the Devil's advocate. Because, you will always have to remind yourself of the fact that the then telecom minister A Raja gave out 122 licenses for Rs.9,200 crore.

"Thus, the 22 licenses which were out on auction this time have already fetched more than what they had got for all the 122 licenses then," he said.

"He (Rai) examined the situation at that particular point of time. He is not a crystal gazer. He couldn't have anticipated, as some papers have said, that the banks are reluctant to give loans because the market has slowed down," he said.

"There are difficulties in the telecom sector. For that you can't hold the CAG responsible. There was such a rush then. Probably, things are stabilising. They (telecom operators) are getting much more realistic. So far as the CAG is concerned, at that point of time, he assessed the whole thing and can't take responsibility for it later on," he said.