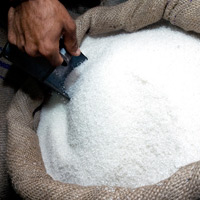 08 November, 2014
Print this article Font size -16+
National Spot Exchange (NSEL), owned by Financial Technologies (India) Ltd, said on Tuesday, 16 July it has been asked by the government not to launch contracts of new commodities until the government finalises a new regulatory framework.

"There is no impact on existing business of the spot exchange. The government has asked us to give an undertaking that circular for launching new products should not be issued till a better regulatory framework is finalised," said Anjani Sinha, managing director and chief executive of NSEL.

Since February 2012, the Forward Markets Commission, which regulates the futures exchanges, has been overseeing the functioning of spot exchanges.

A new framework to regulate the spot exchanges is expected in the next 3-4 months, Sinha said.

The spot exchange clocked an annual turnover of Rs 600 crore in the year to March 2013, and has 67 running contracts on the exchange, with sugar and rice contributing to most of its volumes.