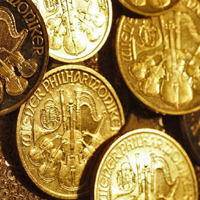 08 November, 2014
Print this article Font size -16+
Gold extended its new year rally to a sixth session on Tuesday, pushing the safe-haven metal to near three-week highs with support from weaker equities and robust Chinese physical demand.

U.S. gold futures also steadied after unusually sharp movements in the previous session, when prices fell 3 percent for a brief period before recovering.

Spot gold has gained nearly 4 percent in the past six sessions, after a 28 per cent drop last year, mainly due to weakness in stock markets and as funds reallocate positions at the start of the year.

"We have been rather surprised by gold's resilience over the course of the last week, but suspect that it's upside staying power will be limited," INTL FCStone analyst Edward Meir said.

Meir said prices will be hurt by the US stimulus tapering, the possibility of a stronger dollar, low inflation and outflows from exchange traded funds - factors that caused bullion to tumble in 2013 after a 12-year rally.

Asian shares fell to a near four-month low on Tuesday, though the dollar rebounded after overnight weakness on disappointing US services sector data that raised concerns about growth in the world's largest economy.

Gold is seen as an alternative to risky investments such as equities.

"We believe the gold price looks likely to move sideways in choppy action," HSBC analysts said in a note. "Investment demand is still sluggish but underlying physical consumption is positive."

Physical Demand
Investors were heartened by buying interest in the physical markets, where the outlook for demand from top buyers - China and India - looked optimistic.

Indian officials are in talks to cut a record high import duty on gold and relax rules on exports, government sources said, after the measures helped narrow the country's trade deficit but now threaten to encourage smuggling.

In China, premiums for 99.99 per cent purity gold on the Shanghai Gold Exchange were steady at about $20 an ounce over London prices.

Volumes traded on the exchange hit their highest on Monday since May.