Going Below The Surface 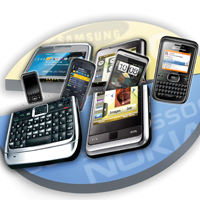 It resembled an iphone, the sound quality was decent and, when asked how much it cost, a fellow commuter said: "Not much, only Rs 7,500. Why should I buy a big-brand phone for much more?" The instrument in question was manufactured by one of the nearly 30 emerging mobile handset makers, mostly Indian, that hit the market in the past year.

IDC, a research firm that tracks the sector, reports that India's mobile handset market grew 6.7 per cent to 100.9 million units in June 2009, from 94.6 million units in the previous year. Emerging handset makers, mostly ex-distributors, have piggy-backed on this boom, some even coming close to smaller players such as LG, Sony Ericsson and others in sales. From 11 players with a market share of 1.2 per cent in June 2008, there are now over two dozen new players who have taken 6.3 per cent of the market by June 2009 (see ‘Fully Charged', page 45). "We see the market getting further crowded, especially in the lower- and mid-market segments," says Deepak Kumar, associate vice-president of research at IDC India.

It started a couple of years ago when pan-India distribution channels sprang up for cheap China-made touchscreen phones that were bestsellers, especially in tier-II and tier-III cities where consumers want feature-heavy, but cheap, phones. But, in December 2008, the Department of Telecom (DoT) banned the imports as most of them came without an Inter-national Mobile Equipment Identity (IMEI) number.

Few players such as Karbonn, a joint venture between Delhi-based Jaina Group and Bangalore-based UTL, survived. Karbonn has gone on to establish a 200,000-mobile phone assembling unit in Bangalore. "People want multimedia phones at lower prices and we are addressing that segment of the market," says Pradeep Jain, managing director of Jaina Group. He believes that Karbonn, whose multimedia handsets start at Rs 3,000, can capture a market share of 7-8 per cent by 2010. Like other emerging brands, Karbonn too buys from China and Taiwan, and brands and distributes the handsets in India.

Another newbie, Movil, has tied up with 71 distributors, and with Tata Teleservices for CDMA bundling. "We are trying to bring in lower value. In the mid-range segment, we want to corner about 5 per cent of the market," says founder-CEO Rajiv Khanna, formerly head of UK-based Fly Mobile.

Spreading Out
The new players are mostly selling handsets in the mid- and low-range segments and in non-metro markets, which is where most of the demand is, taking the path of an extensive network of distributors and retail points.

"We do not aim at the category A (metro) market," says Ramesh A. Vaswani, executive vice-chairman of New Delhi-based Intex Technologies. "Our below-the-line activity is more in the B and C category markets (tier-II and tier-III cities)."  Intex has 200 distributors and 30,000 retail points that sell 75 per cent of its phones in northern and western India, and it expects to earn Rs 175-200 crore this fiscal.

The Mobile Store's in-house brand, Ray, on the other hand, sells only at its 1,300 retail outlets, but has self-selling margin of about 20 per cent. "We are an in-store brand, but we might sell from other stores later," says Rajiv Agarwal, CEO and director of The Mobile Store.

"Given the price structure of these mobile handsets, they sell more in B and C category cities," says Vaibhav Shastri, CEO of Zen Mobile, a brand by Teleecare Network India, which sees only 10 per cent sales coming from urban areas.

Unlike established brands that are moving into services and content, most emerging brands are focusing only on looks and design. They are, however, betting big on dual SIM phones. Fly Mobile gets around 30 per cent of its revenues from India. After its ‘dawn of dual' campaign, Fly now plans to offer VAS (value added services). Spice, which expects to sell 4 million phones in 2009-10, is pushing handsets with big batteries, screen and memory, along with dual SIM handsets.

Movil plans to expand from seven to 20 models. Most players are looking more at buyers replacing their old phones.

Linking up with CDMA service providers, who are increasing their reach, is also working in favour of the smaller labels. Zen has sold 70,000 phones with its Tata tie-up last month. "We have a good relationship with operators such as Tata and Reliance," says Kunal Ahooja, CEO and director of Spice Mobile.

"It will be a tough battle and the fittest will survive," says Ahooja.

Building A Brand
Although most emerging handset players have high sales volumes, they have not been able to build their brands. Most have not analysed their market, most shops do not stock their handsets, and not many customers are aware of their brands. As Prem Kumar, CEO of Fly Mobile, says: "Building a brand is different from selling mobiles."

"A lot of brands (Chinese) had come in, but after a point, they have exited. Brand investment is very important and is key to long-term business," feels Ahooja of Spice Mobile. "We want to be the aspiration of the masses."

Prominent ad-spends are rare though Sri Lankan cricketers launched Karbonn in Delhi, and Spice's Rs 20-crore television campaign has Katrina Kaif as its brand ambassador. "Forty per cent of our ad-spend goes into semi-urban areas as the cost of advertisement is low (there)," says Karbonn's Jain (B and C category cities contribute 75 per cent of Karbonn's sales). The company has spent Rs 50 crore on advertising across all media.

Another emerging brand, Lava, ran a television campaign during the Champion's League matches. Niche advertising in magazines such as My Mobile also brings some visibility. Zen and Xcite, both by Teleecare Networks, spent only about Rs 30 lakh on advertising, but "after the Tata tie-up with Zen, our ad-spend has increased", says Shastri, who is betting on regional marketing as crucial for brand building. He plans to spend another Rs 3 crore on B and C class cities in the next six months.

Chipping Away At The Old Block
While a more precise break-up on the volume of sales for the emerging handset companies is as yet unknown, other numbers are impressive. For example, Karbonn has 500 distributors and 50,000 retail points. The company plans to increase its base to almost 100,000 retail points in the next six months. This is significant especially when compared to 190,000 retail points of Nokia and 50,000 of Samsung.

Similarly, Intex, whose mobile handsets are in the range of Rs 1,500-6,000, has a dealer network in 500 towns and 30,000 retail points. Spice, with 55 regional distribution stockists and 500 distributors, has a retail presence that matches Samsung's 50,000 stores. Seventy per cent of Movil's sales comes from its urban market; it has 5,000 retail points with 71 distributors, and it plans to reach 12,000 retail outlets by November. Zen and Xcite have about 200 distributors and 6,000 retail counters.

However, scaling up the business is not the key to long-term survival in this industry. Wafer-thin margins make sustainability the biggest challenge. Moreover, in this volume-driven business, none of the players have comfortable volumes yet. "As you get economy of scale, you are able to get better margins," says Vaswani of Intex. Adds The Mobile Store's Agarwal, "Some might fall out, some might consolidate. But if there are no major brands, there is no longevity. They will come and go."