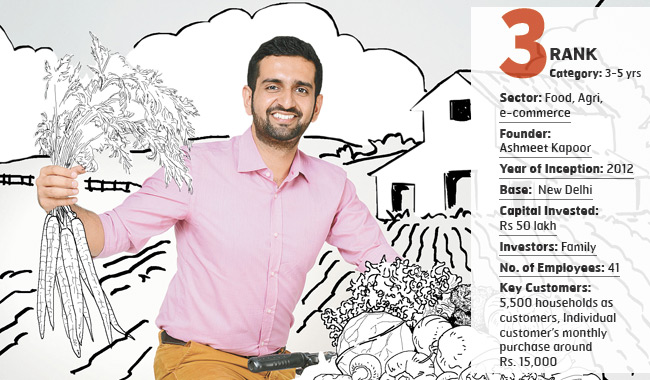 09 June, 2015
Print this article Font size -16+
As the old saying goes: When one door closes, another opens. Sometimes a bigger one. This holds true for Ashmeet Kapoor, 30, a second generation entrepreneur based out of Delhi.

In 2009, soon after a Masters in Entrepreneurship from Brown University, Ashmeet, along with a group of like-minded friends, launched a startup, a solar energy company, and collaborated on a project to provide potable water in West Bengal. But less than a year into the venture, he opted out of the project. “There was no consensus on the model we should adopt,” says Kapoor with no regrets.  For him it didn’t pan out well — perhaps because something greater was waiting for him in his own country.

In November 2010, Kapoor was back in India and travelled across the countryside with the idea of working on either improving rural electrification or resolving water issues. “I travelled across 10 states in six months, leased out a hectare of land in eastern Uttar Pradesh from a friend and farmed for six months,” says Kapoor. The experience, however, was an eye-opener for him. Kapoor soon realised that farmers in rural India were struggling to make a living, and had no opportunities. “Farmers are always in debt: They have to be linked directly to the market to earn their share of profits, which they are deprived of,” says Kapoor. So, he decided to do something that could improve their situation.

“I zeroed in on doing business in organic farming for two reasons. Firstly, I realised that it cuts the cost of production and secondly, it hugely benefits the farmers as the cost of farming is almost nothing, yielding them around 40 per cent more than the market price for organic yields from their farm,” says Kapoor who knew for a fact that there was a big market for organic products in urban India.

Kapoor soon realised it wasn’t easy to convince the farmers to give up what they had been practicing for generations. Educating them about the benefits of organic farming and breaking the perception that it brings a low yield was an arduous task. So, he returned to Delhi and contacted other organic farmer groups in Uttar Pradesh, Haryana and Himachal Pradesh to set up Jagriti Agro Tech, and established I Say Organic. There were also bottlenecks in terms of supply chain, logistics among others, but nothing stopped Kapoor once he’d got the ball rolling.

“After a lot of planning and convincing, came the investment,” says Kapoor. Over the next one year, Kapoor invested about Rs 50 lakh in the business, which was provided by his family.

Kapoor finalised the business model of selling organic fruits and vegetables online after thorough research on urban consumer needs. What is the cost the consumers are willing to pay; which foods have a high demand and which low; and what is the frequency of orders? Finally, in March 2012, the company launched its website-www.isayorganic.com and the business became operational. “It was a big shift from farming to working on an online model,” says Kapoor.

There are 40 varieties of vegetables, 15 of fruits and 31 of rice, pulses and lentils among others like ghee, honey, dry fruits sourced from farmer groups with over 3,000 members. It directly benefits over 100 farmers from nine states, who are paid 40 per cent above the market rate. The various food items are freshly packed, branded and delivered from the company’s office in Okhla, New Delhi, which also houses the cold storage facility. The headcount of employees is currently
forty-one.

The business now stands at a revenue of Rs 2 crore and is looking at a turnover of Rs 7 crore by next fiscal year. Kapoor, who also holds an electrical engineering degree from the University of British Columbia, is positive that the switch to organic farming can transform farming in India, and most importantly, the lives of farmers. “Organic farming is the only way to address the issues farmers face: they can be self-reliant as the cost of farming is negligible and with the increase in demand of organic products, many will be encouraged to produce in a similar fashion,” says Kapoor. He adds that chemical farming is the single largest contributor to global farming and is a threat to the food security of nations.

In the business space of organic food products in India, I Say Organic’s direct competitors are Bigbasket and Nature’s Basket and a few others, so the opportunity to grow and stand out from the competitors is huge. Kapoor is getting ambitious in his plans of expanding to other cities like Mumbai and Bengaluru this year. He is currently in talks with external investors and plans to take his company to an all-new high in the next five years.