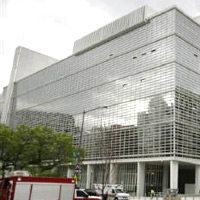 08 November, 2014
Print this article Font size -16+
Much of Bangkok could flood within the next two decades if global warming stays on its current trajectory, as sea levels rise and cyclones intensify, the World Bank said in a new report on 19 June' 2013.
The flooding of 40 per cent of the Thai capital was just one of dozens of negative effects the Washington-based World Bank warned would happen if the world grew warmer by just 2 degrees Celsius (3.6 Fahrenheit), which it said is likely to occur in the next 20 to 30 years under a "business-as-usual" scenario.
Under World Bank President Jim Yong Kim, the global development lender has launched a more aggressive stance to spur action on climate change. Kim has said it is impossible to tackle poverty without dealing with the effects of a warmer world.
The report builds on an earlier World Bank study released last November that shows the global impact of a 4 degree Celsius rise in temperatures by 2100.
"What this report does is give you a much more granular assessment of what the real experience ... (is) going to be," Rachel Kyte, the bank's vice president for sustainable development, told reporters ahead of the report's launch. "And in some ways it's even more daunting."
This report focused especially on the effect of higher temperatures on developing countries in sub-Saharan Africa and south and southeast Asia, where most of the world's poorest people live.
Crops such as wheat, rice and maize have a hard time adapting to a warmer climate, potentially leaving 25 to 90 per cent of the population in sub-Saharan Africa undernourished by the 2050s, according to the report's projections.
Heat extremes will increase by several times in South Asia, with droughts likely to hit north-western India, Pakistan and Afghanistan and reduce available drinking water.
The World Bank also highlighted the impact of climate change on slums, as more people are displaced and move to the edges of cities, where they are often exposed to flooding and are more likely to feel the heat.
"This new report outlines an alarming scenario for the days and years ahead - what we could face in our lifetime," Kim said in a statement. "Urgent action is needed to not only reduce greenhouse gas emissions, but also to help countries prepare for a world of dramatic climate and weather extremes."
The World Bank said it has doubled its spending on adaptation to climate change last year, to $4.6 billion, to help countries and cities figure out how best to deal with higher temperatures. It also loaned $7.1 billion to countries last year in projects that could help mitigate climate change.
(Reuters)
Tags assigned to this article:
economy india world news 9 world bank global warming jim yong kim south asia