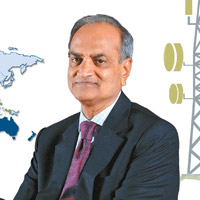 At the beginning of 2000, KEC was fighting for its survival. It was the worst phase in the company's 65-year-old history. In 1982, RPG bought KEC from the ABB Group and the focus was on bagging more orders and achieving higher sales rather than concentrating on profits. Net result: in 1999-2000, KEC had revenues of Rs 969 crore but net profits of only Rs 9 crore. Business was already slow due to the sanctions imposed against India after the Pokhran nuclear explosion in 1998. Orders from state utilities, too, dried up and some projects in Lebanon and Libya were put on hold by clients.

In 2001, the company was facing high interest rates to the tune of more than 13 per cent of turnover. Turnover fell to Rs 501 crore with a net loss of Rs 74 crore, while debt rose to more than Rs 760 crore. Cash flow for project execution dried up and many senior executives left the company. It was then that Ramesh Chandak was brought in as managing director from group company Raychem RPG.

"What we did first was to sell off the posh corporate office in Andheri, along with non-core real estate investments in Bandra Kurla Complex and World Trade Centre in Mumbai and in Jaipur for over Rs 100 crore to get some cash flow," recalls Chandak.

The next step was to focus on power transmission and implement financial discipline across all businesses. A strategic business unit (SBU) structure was brought in. The SBUs were given specific targets to achieve.

In 2007, group companies RPG Transmission and telecom tower company NITEL merged with KEC. In 2010, another group company, RPG Cables, merged, while KEC acquired US-based SAE Towers. It also purchased Jay Signalling, a railway signalling company. The company was on the road to recovery and posted revenues of Rs 2,041 crore with a net profit of Rs 105 crore in 2006-07. By 2010-11, revenues and profits were Rs 4,474 crore and Rs 206 crore, respectively, thanks to big orders such as the Rs 735-crore tower supply order from SNC Lavalin of Canada and the Rs 942-crore substation segment order from Kazakhstan.

New Frontiers
Although KEC's bread and butter continues to be the transmission business, generating up to 74 per cent of the orders, it is trying to turn into an infrastructure EPC firm. In the last quarter, KEC forayed into two new sectors — the water business through a collaboration with Bioworks AG of Germany and the balance of plant sector. It has secured orders worth Rs 31 crore and Rs 40 crore, respectively, in these sectors.

break-page-break
Power systems contribute 18.7 per cent of the orders, railway electrification 5 per cent, cable 1.6 per cent and telecom and water less than 1 per cent. In future, KEC expects businesses other than power transmission to pick up, which Chandak hopes will contribute up to 50 per cent.

Since most orders for KEC come from abroad, the company is likely to continue to flourish thanks to the huge opportunities in overseas markets. Consider this: the US is undertaking an $11-billion transmission and distribution (T&D) grid upgradation programme; Canada is spending $6 billion to replace its T&D infrastructure; Mexico plans to invest $9.3 billion by 2018 for transmission; and, Brazil will require an investment of $10-billion per annum in power wheeling systems till 2030. Moreover, the 2014 FIFA World Cup and 2016 Olympics in Brazil will attract huge investments in T&D.

KEC's other two main markets — Africa and the Middle East — also look lucrative. The World Energy Outlook Report 2009 says that  $75 billion will be invested in T&D in Africa by 2015, and $60 billion in the Middle East. Subsidiary company SAE Towers enjoys a 40 per cent market share in Brazil, the US and Mexico. It is the largest manufacturer of transmission towers in South America, with an annual production capacity of 35,000 tonnes in Mexico and 65,000 tonnes in Brazil. Its tower testing station in Brazil is the largest in the Americas.

"We are operating in many countries for several decades now and this experience is important while bidding and executing projects," says Vimal Kejriwal, president of the transmission business. KEC's internal strategy team assesses a new market thoroughly before entering. "Irrespective of the country, most projects we bid for are funded by agencies such as the World Bank or Asian Development Bank, which de-risks geographical or political factors," says George Varghese, president of the distribution business.

KEC's competitors in India include Kalpataru Power Transmission, Jyoti Structures, Gammon India and Tata Projects, besides some 200-odd small and medium local and regional players. Despite competition, schemes such as the Rajiv Gandhi Grameen Vidyuthikaran Yojana to boost rural electrification and the Rs 50,000-crore Restructured-Accelerated Power Development and Reforms Programme to strengthen the urban distribution networks are expected to provide a steady flow of orders.

The Challenges
A recent HSBC Global Research report says KEC's sales growth will touch 26 per cent in 2012-13, thanks to a 60 per cent growth in new orders. The report says KEC's overall order book will swell to over Rs 10,000 crore next year and to Rs 13,300 crore by FY13.

However, KEC faces many challenges. Its over dependence on government orders, rising raw material prices, hardening interest rates, forex fluctuations and prolonged competition leading to lower-than-expected order inflows, can cause delays in execution of projects and hit revenues.

The company has a net debt of Rs 1,200 crore. KEC's CFO Vardhan Dharkar claims this is manageable considering the cash it can generate in the coming years. Further, the capex programmes are also not large. Around Rs 75 crore is required annually for maintenance and another Rs 150 crore has been planned for setting up a new cable factory in Baroda.

"We will go for acquisitions to either add new product ranges or enter new segments, but for now we are concentrating on consolidating the recently started verticals," says Chandak.