Giving Steel Its Due 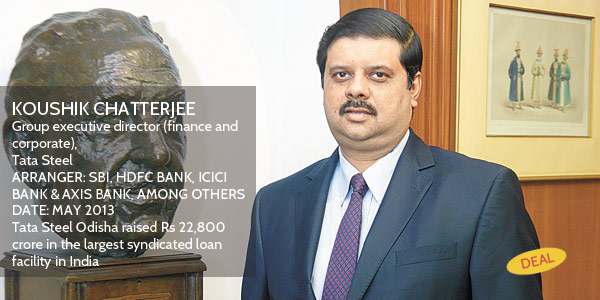 08 November, 2014
Print this article Font size -16+
After 116 years of operations, Tata Steel plans to start a second steel plant at Kalinganagar, Orissa, by March 2015. A dream project for the company, the six-million-tonne-per-annum (MTPA) integrated steel plant has, however, had a rather difficult start. Soon after construction began in 2004, the project sparked off a tribal agitation; as many as 13 people died in police firing. Thereafter, it has been mired in red tape.

So, it wasn’t easy for Tata Steel to find financiers for the project — the cost of which has escalated from Rs 15,400 crore to Rs 43,149 crore on account of delays. Besides, the economy was in the dumps and the company’s European operations (formerly Corus) was also headed south.

But State Bank of India (SBI) believed in the project and stepped forward to help. It, along with 20 other banks, including ICICI Bank, HDFC Bank, Axis Bank and Punjab National Bank, arranged a total of Rs 22,800 crore, making it the largest syndicated loan facility in India and earning it BW | Businessworld’s Deal of the Year award in the ‘INR Loans and Bonds’ category.

Says Rajnish Kumar, chief general manager (project finance), SBI: “This was one of the largest projects handled by us in the non-infra sector. The team was excited about the deal. It has been a great learning opportunity for everyone involved.”

Koushik Chatterjee, group executive director (finance and corporate), Tata Steel, says half of the first module of the Kalinganagar plant, which is to be rolled out in two modules of 3 MTPA each, has been completed with the company’s equity contribution of around Rs 10,000 crore. It has not drawn on the loan yet. “But you can’t build a steel plant without external funding. We will look at how much will be required for completing the project,” he adds.

Macroeconomic conditions have been challenging over the past year. Additionally, the Indian market has been impacted by a sharp depreciation of the rupee. Despite these and the external challenges posed by the tightening of liquidity, increasing non-performing assets in the steel sector and mining restrictions, the Orissa project’s debt issue was oversubscribed.

Tata Steel Odisha (TSOL), a special purpose vehicle (SPV) to facilitate the implementation of the Kalinganagar project, was created to derive the benefits of an SPV structure and reduce stress on the parent company’s balance sheet. It will procure the plant and machinery and lease them out to Tata Steel under an asset-lease structure — of a non-financial operating kind.

At a time when demand for steel is falling, the plant has drawn considerable flak from various quarters. Answering questions from concerned investors at the 2013 annual general meeting, Cyrus Mistry, chairman of Tata group, said: “You can’t have growth without taking risks… The company has followed prudent financial discipline to mitigate the risks.”—