Giving A Dog A Bad Name 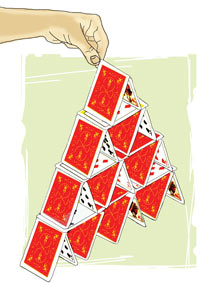 08 November, 2014
Print this article Font size -16+
WMD, or weapons of mass destruction. That’s what they called credit default swaps (CDS) after the 2008 global financial crisis. In September 2008, the scale of the sub-prime credit crisis became apparent; most observers said that the CDS market lay at the core of the crisis. At that time, the notional value of outstanding CDS contracts was estimated at $62 trillion, or about 18 months of global GDP. On 31 December 2011, the notional value of outstanding CDS contracts had declined to $25.9 trillion, according to data collected by the International Securities Dealers Association (ISDA).
What are credit default swaps? In the 1990s, JP Morgan and Co (now JP Morgan Chase) invented the CDS as a way of hedging their loan risks. They are not standardised instruments, but structured ones; they were not regulated, and not even securities in the true sense, but derivatives, traded over the counter. CDS market transactions are conducted over the telephone.

The Reserve Bank of India (RBI) toyed with the idea of introducing CDS first in 2003, and then carried the discussion forward in 2007. But the credit crisis in 2008 intervened, and the idea was put on hold. Then, in May 2011, the central bank issued final guidelines for CDS in corporate bonds (draft guidelines were put on the RBI’s website for public comment in late February 2011, based on the recommendations of an internal working group) that became effective from 24 October 2011.Essentially they are bilateral insurance contracts. If an investor who holds a specific debt issue (say, a bond) of a firm is uncertain about receiving repayments or anticipates a loss in its face value, he buys a CDS as insurance from another institution by paying a premium, usually a percentage of the value of the bond’s face value. Mostly, CDS contracts are for five years.

But in the 10 months since their introduction, there have been very few CDS transactions in the Indian market. In fact, only one has been reported so far. In December 2011, IDBI Bank underwrote two CDS deals to cover Rs 5 crore each of Rural Electrification Corporation (REC) and Indian Railways Finance Corporation (IRFC) held by ICICI Bank. Both deals were for a year. Since then, there haven’t been any others, though media reports in December 2011 suggested that a couple more were in the offing.
The Nature Of The Beast
What makes bankers so wary of CDS (among its other fashionable cousins from the derivates family are equity derivatives, interest-rate derivatives, currency, and commodity derivatives)? Global crisis notwithstanding, there is still a robust CDS global market. So why is it taking so much time to pick up here?
When thinking about introducing CDS, the RBI’s objective was to improve banks’ risk management, particularly credit risk management. Derivatives facilitate separate trading of different attributes of the underlying asset, and credit derivatives are designed to allow separate trading and risk management. For starters, plain vanilla single-name CDS was introduced only on listed corporate bonds.
“IDBI Bank sold protection to ICICI Bank at a spread of 90 basis points, or bps, and for a 1-year tenor,” says N.S. Venkatesh, head, treasury, at IDBI Bank. So far, however, IDBI Bank has just those two outstanding trades.” Why haven’t there been any more, beyond what may have been the two ‘ceremonial’ transactions?

“We have a skewed banking system in terms of market share — nationalised banks run about 70 per cent of market share of banking-funded balance sheets, and foreign and private sector banks share the rest,” says Harihar Krishnamoorthy, treasurer, FirstRand Bank India. “The latter have limited capability in funding balance sheets, but their ability to take on credit risk is good. CDS can help transfer credit risk from the former to the latter.”

The biggest problem, say market folk, is that the Indian corporate bond market is considered extremely shallow and illiquid. There are any number of AAA-rated bonds, which have the highest degree of safety, and thus a low credit risk (of default). And there are very few takers for AA- or A-rated bonds. Why would an investor holding triple A-rated bonds feel the need to buy protection? That means a small market for CDS to grow, given the smaller number of AA- or A-rated bond issuers or holders.
Second, guidelines are perceived as overly restrictive. They make it mandatory for the buyer of protection to have an actual bond. Hedging sans bond, or ‘naked’ hedging, is not allowed, thus effectively shutting the door on speculation, an essential requirement for a liquid market.
Third, most of these bonds end up being held to maturity (HTM); that saves the banks from having to mark them to market and provide for potential losses in value. “How can a derivative market prevail when the underlying asset is completely in the HTM category and not available for trading?” asks Abhijit Gulanikar, chief officer (investments) at SBI Life Insurance.

break-page-break
Unequal Opportunity
The CDS market has two kinds of players: market makers and the users. The RBI mandates that commercial banks, primary dealers, insurers (under the Insurance Regulatory and Development Authority), mutual funds (Securities and Exchange Board of India), pension funds (under the Pension Fund Regulatory and Development Authority), and provident funds (Employees’ Provident Fund Organisation) can be market makers. They can also be users along with corporates, non-bank finance companies (NBFCs), and financial institutions.
“Insurance companies were hoping they will be allowed to enter the CDS market as soon as the guidelines were announced late last year, subject to Irda regulations,” says Gulanikar. “But Irda guidelines are still to be issued, though we hope they will be out soon.” But even if the guidelines are out soon enough, there will still be other concerns for insurance companies.That means users cannot sell protection, but can only buy. “This ensures orderliness, and people who do not understand the risks involved, do not enter the market,” says Venkatesh. But it’s still a skewed market. What makes it even more so is that it is currently only an inter-bank market. Almost all other regulators (other than the RBI, that is) are yet to issue guidelines for entities they supervise, making it difficult to broaden the market.
They may be allowed to hedge — that is, buy protection against an underlying credit exposure — but may not be allowed to sell protection. Internationally, insurance companies both buy and sell CDS protection and are one of the biggest sellers of protection.
“Sebi is yet to release guidelines for mutual funds, and till now there has been no intimation on when that will be,” says Killol Pandya, head of fixed income at Daiwa Asset Management.
But FirstRand’s Krishnamoorthy believes mutual funds and insurance companies should not access the same market because bond yields are tax-free for them but taxable for other investors. “That would distort the market. Bond yields could be artificially low, and thus there would not be enough meat to pay a CDS premium,” he says.

Fear Of Flying
Analysts suggest given what happened during the crisis and the role many believe CDS played in causing it, the RBI has been overly cautious with its guidelines and that could be a reason why the rupee CDS market might never resemble its global counterparts. But what excites experts is the opportunity: bonds issued by special purpose vehicles (SPVs) launched by infrastructure companies can be used for CDS contracts, a step that could provide a fillip to infra bonds and the sector itself.

Of the almost close to 20 credit derivatives products that exist globally, only single-name CDS has been introduced here, leaving out a gamut of other contracts such as credit spread options, credit-linked notes, binary CDS. K. Vaidyanathan, director of Quantum Phinance, a Mumbai-based finance consulting firm, says single-name CDS makes up 29.3 per cent of the global credit derivatives product usage. “That’s next only to Full Index Trades at 29.4 per cent, followed by Synthetic CDOs (collateralised debt obligations) at 12.9 per cent,” he says.
The largest number of CDS contracts is in the 1-5-year period (52 per cent), followed by 5-10 years (21 per cent), Vaidyanthan adds. “But it is unlikely that the rupee CDS market will ever touch the $62-trillion number that the global credit derivatives market reached in 2008.” That number was more than the total of the US federal debt ($10 trillion), stockmarket capitalisation ($22 trillion), the mortgage market ($7 trillion) and the US treasuries market ($4.4 trillion) combined.
Experts say that in the Indian context, it will be very tough to replicate these numbers given RBI’s tough stance on regulation, particularly on margins that need to be maintained for managing counterparty risk in CDS contracts. Shilpa Kumar, senior general manager at ICICI Bank, says there are conflicting legal opinions on the netting of counterparty risk arising out of derivative contracts.

“It is necessary to evolve an acceptable operational framework for margining of CDS contracts through consensus among market participants,” she says. “Further, in order to have a heterogeneous market, it is essential that non-bank entities be encouraged to play an active role in this market.”
But given that both CDS and corporate bond markets are inter-dependent, will there be greater interest in the former, given the state of the latter?
Some believe that with time and growing awareness, there could be. Venkatesh of IDBI Bank is one of them. He says most banks are currently in the process of taking permission from their respective boards and should enter the market in the next few months. “Apart from a few banks, other market participants may not be familiar with the concept, the documentation involved and the potential benefits of buying CDS,” says Pawan Agrawal, senior director, CRISIL Ratings.
But all said and done, there is still a long way to go for CDS; the journey will be long and arduous. Banks and other players could get lost, and may have to review their road maps. But it’s not a road that can be travelled by default.