Getting Arjuna award has always been a "dream": Deepti Sharma

Getting Arjuna award has always been a "dream": Deepti Sharma

New Delhi [India], Aug 24 (ANI): Women's all-rounder Deepti Sharma on Monday said that she has always dreamt of being conferred with the prestigious Arjuna Award.
Deepti is one of the 27 athletes who will be getting the Arjuna Award on August 29 this year.
"I am very happy, it is a proud moment for me that I will be conferred with the Arjuna Award. Everyone in my family is very happy, I have worked very hard from the very start, being conferred with Arjuna Award has always been a dream," Deepti Sharma said in a video posted by the official handle of BCCI.
"Mithali Di, Harmanpreet Di, Jhulan Di have also been given this honour earlier, so being in their company is a very big thing," she added. 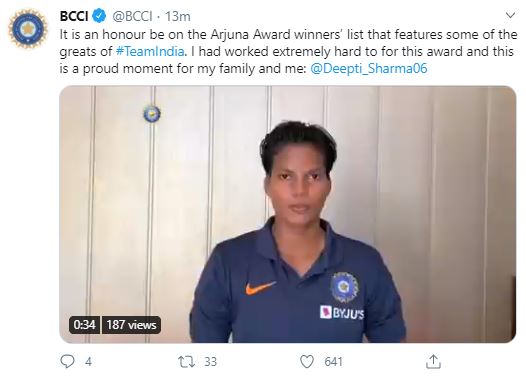 Arjuna Award is an honour bestowed by the Ministry of Youth Affairs and Sports to recognise the achievement of athletes.
The award carries a cash prize, a bronze statue of Arjuna and a scroll.
Deepti Sharma has so far played 54 ODIs and 48 T20Is.
In ODIs, she has taken 64 wickets and has managed to score 1,417 runs at an average of 38.29.
In the shortest format, Deepti has taken 53 wickets and has registered 423 runs at an average of 18.39.
Vinesh Phogat (Wrestling), Mariyappan T. (Para-Athletics), Rohit Sharma (Cricket), Manika Batra (Table Tennis) and Rani Rampal (Hockey) will be conferred with the Rajiv Gandhi Khel Ratna Award this year.
Sprinter Dutee Chand, cricketer Ishant Sharma, and shooter Manu Bhaker are among the 27 athletes who will be conferred with the Arjuna Award.
National Sports Awards which include the Rajiv Gandhi Khel Ratna award, the Arjuna award, the Dronacharya award, and the Dhyan Chand award, are conferred on athletes every year by the President of India at the Rashtrapati Bhavan on August 29, the National Sports Day.
However, this year, the names would be announced by President Ram Nath Kovind virtually due to the ongoing coronavirus pandemic.
"The ceremony will take place virtually but what we will have to see how the exact process would pan out," a source within the Sports Ministry had told ANI. (ANI)