Georgia Zoo Animals On The Run After Floods 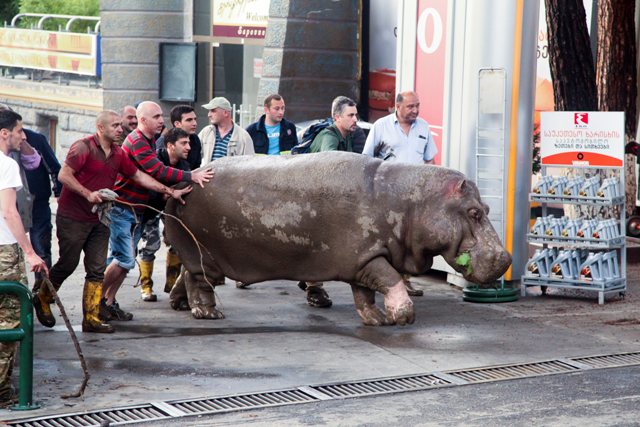 16 June, 2015
Print this article Font size -16+
Tigers, lions, a hippopotamus and other animals have escaped from the zoo in Georgia's capital after heavy flooding destroyed their enclosures, prompting authorities to warn residents in Tbilisi to say inside on Sunday.
At least eight people have been killed in the disaster, including three zoo workers, and 10 are missing.
An escaped hippo was cornered in one of the city's main squares and subdued with a tranquiliser gun, the zoo said.
Some other animals also have been seized, but it remained unclear how many are on the loose. Bears and wolves are also among the animals who fled from their enclosures amid the flooding from heavy rains and high winds.
Tbilisi Zoo spokeswoman Mzia Sharashidze told the InterPressNews agency that three dead bodies had been found on the grounds of the zoo, including those of two employees.
"Search for animals continues, but a large part of the zoo is simply non-existent. It was turned into a hellish whirlpool," Sharashidze said.
She said 20 wolves, eight lions and an unspecified number of tigers, jackals and jaguars had been shot dead by special forces or were missing.
"Only three out of our 17 penguins were saved," she added.
It wasn't immediately clear if the eight people were killed from the flooding or animal attacks. The zoo said one of the dead was Guliko Chitadze, a zookeeper who lost an arm in an attack by a tiger last month.
Heavy rains and wind hit Tbilisi during the night, turning a normally small stream that runs through the hilly city into a surging river. The flooding also damaged dozens of houses.
City mayor David Narmania told journalists that eight people were known to have died and 10 others were missing.
Helicopters are circling the city and residents have been told to stay indoors except in an emergency. About 1.1 million people live in the former Soviet republic's capital.
(Agencies)
Tags assigned to this article:
news 7 natural disasters wildlife floods tbilisi georgia