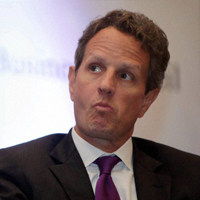 08 November, 2014
Print this article Font size -16+
Visiting US Treasury Secretary Timothy Geithner and Federal Reserve Chairman Ben Bernanke today met corporate India leaders and discussed the recent American policy measures like the quantitative easing and the economic climate in the country.
"We got briefed by both on the US economic situation. We briefed them on India and said we were very confident now that the reform process is taking place," Godrej group Chairman Adi Godrej told reporters after the breakfast meet arranged by industry lobby CII, which he heads.
A majority of the business leaders mentioned that the recent decision of the Federal Reserve to inject third round of liquidity injection and its implications were discussed. "He (Bernanke) explained what the strategy for QE3 (quantitative easing 3) is and assured us that the implications are not going to be as large as people fear," vice-chairman and managing director of infra financier IDFC Rajiv Lall said.
Finance Minister P. Chidambaram during interactions with Geithner on 9 October had expressed his concerns over the impact of the QE3 on commodity prices, as that will have a direct bearing on the government's and the RBI's efforts at controlling inflation and boosting growth here.
To a question, Lall said contentious issues like those surrounding visas to Indian IT professionals by the US and outsourcing were not raised by the Indian industry.
Mortgage major HDFC Chairman Deepak Parekh said the recent spate of reforms in the country, the need for the government do to reduce subsidies and boost growth were also discussed. "They (the US) are very positive (on the recent reforms)," he said. Chanda Kochchar, Managing Director and CEO of the country's largest private sector lender ICICI Bank said, "I think their outlook is very positive. Of course, everybody recognises that much more needs to be done as well. But I think their initial reaction is very positive."
Others present at the meeting included CII Director General Chandrajit Banerjee, Indian financial institution Kotak group's Uday Kotak, Venu Srinivasan of industrial conglomerate TVS Group, Ishaat Hussain of Tata Sons and the US Consul General in Mumbai, Peter Haas.
Both the visiting US officials had a series of meetings with top government officials, including Prime Minister Manmohan Singh and Finance Minister P Chidambaram yesterday in New Delhi apart from industry bodies and will be winding up their India visit with a series of meetings in the financial capital.
After the meeting with the industry leaders, which happened at the rooftop of a star hotel overlooking the scenic Marine Drive, they will drive to the nearby RBI headquarters on the Mint Road to meet Governor D Subbarao and his deputies.
Geithner and Bernanke are expected to make a brief statement about their interactions in the city after their meeting at the Reserve Bank of India.
(PTI)
Tags assigned to this article:
rbi hdfc news 5 p chidambaram adi godrej ben bernanke timothy geithner federal reserve cii us fed qe3 deepak parekh quantitative easing 3 rajiv lall chanda kochchar