Mumbai (Maharashtra) [India] June 18 (ANI/PRNewswire): Free Fire, the world's most popular mobile battle royale game, wrapped up its action-packed online squad mode tournament yesterday - the Free Fire Battle Arena (FFBA).
Open to all players on the Indian server (India, Bangladesh, and Nepal), the FFBA saw the region's best teams battling it out from their homes to win big from a prize pool of 3,00,000 diamonds.
What started off with more than 5,00,000 teams participating in the online qualifier stage culminated in a gripping finale, with Team-8bit taking home the championship and 1,00,000 diamonds.
The FFBA was the first Free Fire tournament for players in Bangladesh and Nepal. Teams from both countries put in strong performances, with two teams from Nepal advancing all the way to the finals.
Royal_Gurkhaa and Nepal-Esport ultimately finished in 11th and 12th place respectively.
Check out the final standings and their prizes: 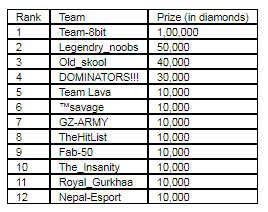 The FFBA generated high interest from the community, with millions of fans tuning in to catch the high-octane action online. All of the games - including the league, playoffs, and the grand finale - were broadcast on the Free Fire Esports India YouTube and Free Fire India Official BOOYAH! channels, with local shoutcasters providing commentary in Hindi.
These live streams attracted more than 38,00,000 cumulative views in total across all platforms.
Tournament format
To register, participants had to sign up for the Free Fire Cup (FFC), an all-new in-game mode that helps support large scale online qualifiers for esports tournaments, including the FFBA.
The tournament kicked off with the league stage, where the top 24 teams were divided into four groups of six teams each. These four groups competed over six match days, and the top two teams from each group qualified for the finals, filling in the first eight slots.
Playoffs were held for the remaining slots. The teams ranked three-five from each of the four groups participated in one day best-of-six format matches for a wildcard entry to the last four spots in the finals.
For the latest news, please follow Free Fire Esports India Instagram and Facebook page.
Free Fire can be download at the following locations:
* Apple iOS App Store:
https://apps.apple.com/US/app/id1300146617?mt=8
* Google Play Store:
https://play.google.com/store/apps/details?id=com.dts.freefireth&hl=en_US
This story is provided by PRNewswire. ANI will not be responsible in any way for the content of this article (ANI/PRNewswire)