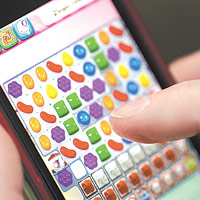 08 November, 2014
Print this article Font size -16+
King, the firm behind the hit cellphone game Candy Crush Saga, is planning a US stock market debut that some analysts think could value it at more than $5 billion and herald a flurry of tech company listings this year. The successful flotation of Twitter in November and a surge in Facebook’s share price have fuelled speculation that a string of tech firms, including music-sharing service Spotify, lodging service Airbnb and payments company Square, could come to the market. But some analysts question whether King can maintain its breakneck pace of growth, given the difficulty of some other game makers — such as Farmville’s Zynga, whose share price has halved since its 2011 IPO — in sustaining their momentum.

Peace Offering
Morgan Stanley has reached a $275-million proposed settlement with the US Securities and Exchange Commission (SEC) that will allow the Wall Street bank to move past a substantial legal overhang from the financial crisis. The SEC has been investigating Morgan Stanley’s role as a sponsor and underwriter of subprime mortgage-backed bonds that lost money soon after being issued in 2007. Morgan Stanley’s settlement will follow similar deals reached between the agency and rivals, including Goldman Sachs and Citigroup.

High Energy
General Electric plans to intensify research in complex energy projects such as waterless fracking and gas turbine efficiency by earmarking an additional $10 billion through 2020 for its ‘ecoimagination’ budget, according to reports. The research budget shows how reliant GE has become on the energy industry, its fastest growth area, as it works to become a dominant supplier of equipment and services to oil, natural gas and alternative power companies at a time when the US is witnessing an unprecedented energy boom. While GE doesn’t forecast what it plans to spend on its main capital budget, the new commitment gives investors a clue as to what its priorities will be.

More Cuts
JPMorgan Chase and Co, the largest US bank, announced thousands of job cuts as the mortgage lending business slowed, and said it was lowering its profitability target. The company said it expected total headcount to fall by 5,000 to 260,000 in 2014. Around 6,000 full-time and contractor jobs in JPMorgan’s home loans unit and 2,000 jobs in its branch and credit-card network will be cut. At the same time, the bank expects to add 3,000 new jobs in its control function, including areas like compliance. Chief executive Jamie Dimon said the job cuts were part of the adjustments the company had to make continually as its business changed. These cuts in mortgage banking raise the total number of mortgage cuts that the company originally called for by end-2014 to 17,000.

Joining In
Nokia, soon to be part of Microsoft, is turning to software created by arch-rival Google for a new line of phones it hopes will make it a late contender in the dynamic low-cost smartphone market. Its first models, Nokia X, X+ and XL, rely upon an open version of the Android mobile software system created by Google that has become the world’s most popular software used in smartphones. The release of the phones at the Mobile World Congress just days before Nokia sells its handset business to Microsoft in a $7.2-billion deal, is an attempt to stay relevant in emerging markets, where low-cost Android phones are being snapped up by hundreds of millions of buyers. Nokia CEO Stephen Elop said the market had “shifted dramatically”, and the group needed to address a sub-$100 segment that is set to grow four times faster than more expensive phones, and that this was  a move that introduces the “next billion” users to Nokia’s hardware and Microsoft’s services.

Inching Up
Germany is set to accelerate away from France and Italy in 2014 as the fragmented euro zone economy gradually recovers from its worst crisis, the European Commission said. In a departure from the recent gloom, Brussels slightly upped its growth prediction for the bloc’s €9-trillion economy to 1.2 per cent in 2014 from 1.1 per cent. It was powered by an expected 1.8 per cent jump in the zone’s biggest economy Germany. No. 2 France is expected to grow 1 per cent in 2014. For EU as a whole in 2015, the commission raised its forecast to 1.8 per cent. “The worst of the crisis may now be behind us,” said Olli Rehn, EU commissioner for economic policy.

State Of Siege
It’s been a rough month for bitcoin investors, with cyber attacks on several exchanges, a sharp fall in the currency’s value, and rising pressure from regulators. On 25 February, Mt Gox, once the biggest bitcoin exchange, stopped trading, sparking concerns about the future of the unregulated virtual currency. A handful of protesters who had gathered around the Mt Gox office in Tokyo said they’d lost money investing in bitcoins. US attorney Preet Bharara is said to have subpoenaed Mt Gox and other bitcoin businesses to seek information about how they handled recent cyber attacks.

Debt Trauma
China’s corporate debt has hit record levels and is likely to accelerate a wave of domestic restructuring and trigger more defaults, as credit repayment problems rise. Chinese non-financial firms’ total outstanding bank borrowing and bond debt stood at around $12 trillion at the end of last year — equal to over 120 per cent of GDP — according to Standard and Poor’s estimates. Growth in Chinese company debt has been unprecedented. A Thomson Reuters analysis of 945 listed medium and large non-financial firms showed total debt soared by more than 260 per cent from December 2008 to September 2013. Analysts say firms are selling assets and undertaking mergers to avoid defaulting on borrowings.