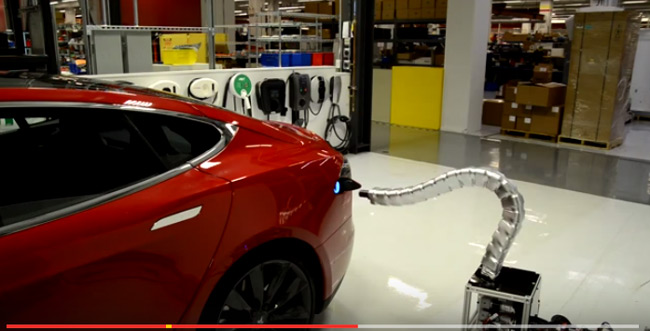 07 August, 2015
Print this article Font size -16+
Another day, another robot. It seems like not a day passes without someone demonstrating a startling robotic technology. That, together with the increasing capability of machines and algorithms, is making it obvious that machines are threatening to take way the jobs that people have done all along.
It’s been known for many decades that the future of work, with technology getting smarter, is going to mean the loss of jobs. But abruptly, this future has begun to get uncomfortably close.
Google, Uber, Tesla and even Apple (it is rumoured) are working towards making driverless cars. That’s frightening enough in itself, for many people, but if it were to work as envisaged, just imagine the millions and millions of drivers who would lose their jobs and means of livelihood. In some countries, more jobs could be open to them, but this is certainly not true of everywhere.
This week, Tesla demo’d a weird robotic snake that charges an electric car without human intervention. It has fluid movements as it emerges to sense and attach itself to a charging port. No one’s needed to man this charging station. There goes a job is what immediately came to my mind.
In Japan, sushi restaurants use technology more than they do people, reducing the need for people to take your orders, serve you, etc. It’s efficient, but all the tech takes away jobs from waiters. In fact, there are now entirely waiterless restaurants.
Robots can do window cleaning, take care of the elderly, read the news, clean the house, chat with the kids, taking away the occupation of many. That’s the price of progress. But the situation is much more widespread than one imagines when you look at the technology available on an everyday smartphone and the jobs that will have been impacted from that. Language translation, for instance, has improved hugely in the past few years. With the understanding of natural language having become better, you now have translation apps that do quite a passable job of being an interpreter.
There’s a school of thought that holds with the idea that new jobs will evolve to make up for the ones that technology gobbled up. But whether it’ll be the same people who lost out who will fill the new jobs is very doubtful. It’s thought that entirely new skills will be called for – as we can see with many new areas today. And that’s the important thing to remember as the transition to different types of work happens – make sure you’re learning new things.
Tags assigned to this article:
robotics future now mala bhargava