Future Now | A Keyboard For The Mobile Era 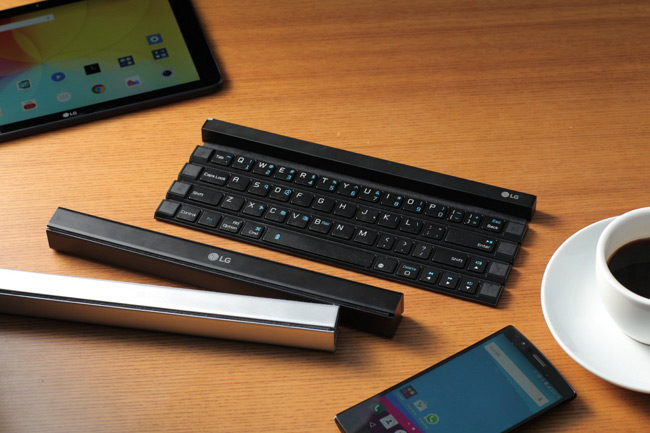 28 August, 2015
Print this article Font size -16+
People have come up with innovative keyboard designs in the past. Sadly, none have really gone mainstream, except perhaps a few meant specifically for gaming or split keyboards made by Microsoft.
TrendHunter, a site that ferrets out futuristic and interesting tech, rounded up a big bunch of clever and mostly amusing keyboards. There’s a full sized glass keyless keyboard, which is just like typing on the virtual keyboard of a tablet, only probably more difficult and rather pointless though it has a motion sensing technology that follows the user’s hand movements. There’s a laser keyboard that projects an image of a keyboard over any surface and even makes clicking noises for the virtual keys – again rather difficult to use for those who can type without looking. There’s a weird keyboard that you can type with on the rear as well as front – an odd new approach to typing. An even stranger idea is a keyboard (and speakers) built right into a pair of pants for those who are really on the go and connect to devices whenever and wherever. And then there are flexible keyboards, keyboards that light up in lovely colours, spill-proof keyboards, a mouse built right into a keyboard, shape-shifting keyboards that adjust to your typing style and so on.
But what about some practical keyboards for use with the iPad and other tablets and for smartphones that are getting larger by the way? Well, there are foldable keyboards readily available even now on such places as Amazon. These fold in half, typically, though there are a few that fold in odd splits. All in all, these keyboards have been around since 2008 and still haven’t made it into the wild possibly because they aren’t really practical when it comes down to real life  usage.
But now LG has just a wireless keyboard meant exactly to meet the needs of mobile device users. What’s different about this keyboard, called the Rolly because it is indeed rollable, is the material it’s made of. It’s impact resistant polycarbonate and ABS plastic and much more durable and solid than other attempts. Going from the top, you can just start rolling it in until it becomes a nice stick that can fit into handbags or a big pocket. Obviously, it works with Bluetooth to connect to mobile devices and even has a stand built into it – presumably it’s solid enough to take the weight – and a tablet can readily be stood up in it making it a hybrid.
It’s a bit of a pity that the Rolly is being showcased at a time when tablet sales are really going down, but if enough Rolly’s were to be around and if they’re as good as they look, it could put a dent in the hybrid market which isn’t doing badly.
Tags assigned to this article:
future now mobile keyboard LG wireless keyboard mala bhargava