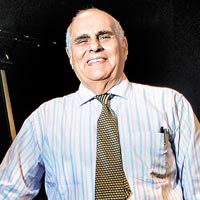 
The third — which is hardly 28 years old — is the Budapest Festival Orchestra. I had the pleasure of hearing them a few times. It is amazing what Ivan Fischer, its founder and Hungarian conductor, has achieved in what is a comparatively short period in the life of an orchestra. These musicians are truly of superb quality. When they play music that suits them, going to their concert becomes not just an evening out, but a musical experience that leaves you rather limp. It is a huge, gorgeous and homogeneous sound that is very musically realised and that washes over you like some great warm wave.

Who can leave the Berlin Philharmonic out of the top 5? With a tradition almost unmatched in musical history and with iconic conductors such as Wilhelm Furtwaengler, Herbert von Karajan and Claudio Abbado shaping its destiny over the past half century, this extraordinarily polished German miracle epitomises the very best in tradition. And under Simon Rattle it is charting into modern territory with great success.

The Royal Concertgebouw Orchestra, rated by many as the finest in the world, owes its impressive pedigree largely on account of its association with the legendary Willem Mengelberg. He shaped and honed this orchestra for 50 years into the brilliant ensemble it is today, and is able to interpret music from different schools in the most idiomatic matter.

Few orchestras in the world have as deep an understanding of different schools of music as this unique ensemble, and it is aided by being housed in one of the finest concert halls in the world — the Concertgebouw in Amsterdam. It is a great recording orchestra and the musicians are legends in their own lifetime.

But hey, what about the Americans? They have some of the best orchestras in the world and, perhaps, if there is a chance for five more, I would like to speak about (surprise, surprise) the Metropolitan Orchestra, which is not only a great orchestra but, under James Levine, has become one of the finest symphony orchestras in the US. Their subscription series in Carnegie Hall are always a pleasure to attend. Another favourite American orchestra is the San Francisco Orchestra under Michael Tilson Thomas. It is probably one of the most exciting Mahler orchestras in the US and its dynamic approach is extremely thrilling. I regret leaving out the great Boston, Chicago and Cleveland ensembles, which are absolutely first rate, too.

Evidence points to the great resurgence of love of western classical music in Asia — particularly in China, Korea and Japan, and it is often said that the future of western music lies in the new centres of Asia. I certainly hope this is true and our small beginning with the Symphony Orchestra of India helps nurturing this image.

Great music has been played for the past 400 years by thousands of orchestras and appreciated by millions of people, and will not be denied its rightful place as one of the greatest art forms ever devised.