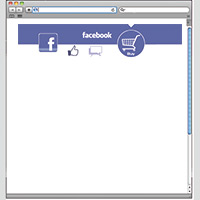 08 November, 2014
Print this article Font size -16+
Facebook’s July announcement that it is trialling a ‘buy’ button is good news for brands.  With this, the business value for brands to be present on the social network will be complete. From a mere engagement platform, the addition of this social commerce tool could open up a lucrative virtual marketplace for brands.

On 12 August, Facebook will shut down its Gifts store, a service it had launched in late 2012.  The social network has decided not to focus on e-commerce, but be more of a marketplace and earn revenues (perhaps through a commission model), while others use the platform to sell.

The two developments are clearly interlinked. It is clear from Facebook’s official statement on the shutdown of Gifts: “We will be using everything we learned from Gifts to explore new ways to help businesses and developers drive sales on the web, on mobile and directly on Facebook.”

The ‘buy’ button will certainly make Facebook a compelling proposition for brands. With 1.28 billion registered users, this could be the largest online store. For those delivering ads on the social network, this could close the sales funnel neatly.

Other networks too are gearing up for the e-commerce space.  Twitter, which is also working on a commerce offering on the network, has just acquired CardSpring, a payment infrastructure company. Social shopping is clearly the next big thing.

BRAND BUZZ
Message Appeal
Ever since Facebook acquired WhatsApp, chat messenger platforms have been in the limelight. Line, WeChat, Hike, BBM and others have leveraged the growing clout of the space. Recently, Facebook forced mobile users to download its Messenger as a standalone app. Unwilling to stay behind in the race, Twitter too has announced it is working on a direct message tool. However, Twitter has limited appeal right now as a messaging platform due to its 140-charracter limit.Let’s wait and watch how Twitter overcomes these limitations.

Social Trivia
According to Digital Insights, 44 per cent of users on Twitter have never sent a tweet,  84 per cent of women and 50 per cent of men stay active on Pinterest, more than 2 users sign up for LinkedIn every second and 23 per cent of teens consider Instagram as their favourite social network.

LEADER
Kiran Mazumdar Shaw
@KiranShaw
CMD, Biocon
“Safety is an issue that no political party can stand on a moral high ground as all parties hv failed to address women and child safety”

Ronnie Screwvala
@RonnieScrewvala
Co-founder of UTV
“If backed with good accountability and instils enough trust among people, http://www.mygov.nic.in  could be a very great initiative”