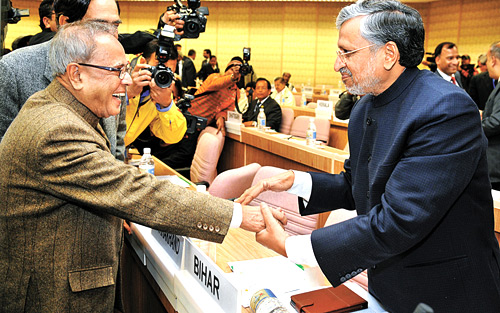 ‘Vanakam' Hillary
US Secretary of State Hillary Clinton last week paid a maiden visit to Chennai, where several US companies have investments. Clinton described Tamil Nadu as one of the "most indu-strialised, globalised and educated" states in India. She called on Tamil Nadu chief minister J. Jayala-lithaa. "The US is betting on India's future," said Clinton, in a meeting at the Anna Centenary Library. "The opening up of India's markets will lead to a more prosperous India, Asia and beyond the Asia-Pacific region." Interacting with women's forum members, she said the US and India will set up a programme at Bangladesh's Asia University of Women to train more women to be local leaders.

Space Matters
After 33 flights and 125,935,769 statute miles, the iconic US space shuttle Atlantis ended its final flight safely on 21 July at the Kennedy Space Center in Florida. And with it ends a three-decade long US dominance on space programmes.

Nasa, the US space agency, will not be sending another human spaceflight for an indefinite period. The US space shuttle story has blown off an estimated $210 billion so far. The country will now have to rely on other countries to launch astronauts. The retreat of Atlantis is likely to render 3,200 of the programme's 5,500 contract workers jobless. But the move also opens up avenues for a new commercial space transportation industry.

Smart Job
Steve Job's Apple this week unseated Nokia as the world's top smartphone seller. While Nokia sold 16.7 million smartphones in second quarter of this fiscal, over 20 per cent less than the previous quarter, Apple sold 20.3 million iPhones. Nokia, still the largest phone maker by volume globally, lost more market share in Q2. An estimate shows its overall market share fell from about 30 per cent in the previous quarter to about 24 per cent in the second quarter. During the period, Apple's sales revenues rose 82 per cent, whereas Nokia's operating profit suffered a steep loss of €487 million.