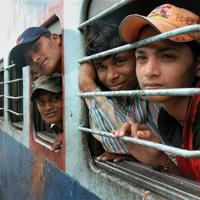 08 November, 2014
Print this article Font size -16+
Continuing efforts to clean up Railway finances, the Budget for 2013-14 effected an across-the-board 5.8 per cent hike in freight charges to net in Rs 4,200 crore a year while raising passenger reservation and related charges to rake in an additional Rs 483 crore. The BSE benchmark Sensex plummeted by 316.55 points to close at three-month low of 19,015.14 as the rail budget dampened the market sentiment amid particularly weak global cues.
The Sensex at one point of time fell below 19,000 level for the first time since November 29, as government announced hike in rail freights, particularly commodities, raising fears of a rise in inflation. Similarly, the broad-based National Stock Exchange index Nifty dipped below 5,800 level and closed 93.40 points lower at 5,761.35 led by refinery, auto and capital goods.
Railway Minister P K Bansal, the first Congress Minister to present Railway Budget in 17 years, however, did not touch the basic passenger fares which he had hiked across-the-board only last month to raise Rs 6,600 crore.
Rail Freight Hike On Diesel May Lead To Rise In Retail Prices
Sensex Falls To 3-month Low

Adopting the dynamic fuel adjustment component (FAC)- linked revision in tariffs, proposed by his Trinamool predecessor Dinesh Trivedi last year, the Minister slapped an average 5.8 per cent increase on goods.
This will cover among other things foodgrains and pulses, coal, iron and steel, urea, iron ore, diesel, kerosene and LPG, which the industry and political parties feared could lead to further inflation spiral.
Beginning April 1, the FAC will be adjusted in freight rates twice a year in line with changes in diesel price. "In the light of deregulation of high speed diesel (HSD), Railways' finances need to be rationally insulated and to this end a mechanism to neutralise the impact of fuel prices on operating expenses is required to be put in place," Bansal said.
The upward revision of reservation fee and supplementary charge for superfast trains will mean an increase ranging from Rs 5 on the second class to Rs 25 on AC 1st and Executive Class.
Tatkal charges will go up by Rs 15 on sleeper class to Rs 100 on Executive Class. Clerkage and cancellation charges will go up by Rs 5 on second class to Rs 50 on Executive Class.
The Budget proposes to withdraw the enhanced reservation fee and proposes no increase in parcel and luggage rates. The changes will come into effect from April 1.
Bansal told a post-Budget press conference that he was no apologetic about the hike in freight rates and passenger charges.
In his 75-minute speech which was drowned in opposition slogan-shouting towards the end, Bansal said there are a number of supplementary charges which have not been revised for last several years.
"I propose to effect marginal increase in some of these.
These include supplementary charge for superfast trains, reservation fee, clerkage charge, cancellation charge and tatkal charge," he said, without specifying the quantum of these charges.
Bansal, however, proposed to abolish the concept of enhanced reservation fee with a view to simplifying the fee structure, having already discontinued development charge in January this year.
Rail-associated Stocks Fall
Stocks of rail associated companies such as Kalindi Rail Nirman, Hind Rectifiers, Kernex Microsystem, Titagarh Wagons and Taxmaco suffered the most by losing up to nearly 12 per cent.
Refinery stocks led by Reliance Industries, which mostly use rail transport to move their products was another weak spot. Market heavy Reliance Industries dropped 3.51 per cent to Rs 823.95, as the oil and gas sector index plunged 3.07 per cent to 8,689.98.
Auto sector index was second worst performer by losing 2.76 per cent to 10,487.67 as Tata Motors, Maruti Suzuki and Manindra and Mahindra dropped as freight hike might cut their revenues.
In 30-BSE index components, 25 stocks declined while five stocks such as Infosys, Bharti Airtel, Hindustan Unilever, Tata Consultancy and NTPC bucked the trend by ending higher.
In January, the minister effected an across-the-board hike in passenger fares that would net Rs 6,600 crore a year.
However, the subsequent hike in diesel price and electricity charges put an additional burden of Rs 3,300 crore on the railways which is projected to see a loss of Rs 24,600 crore in the current financial year, up from Rs 22,500 crore in 2011-12 in passenger traffic segment. .
India's railway network is the world's fourth largest but it has suffered from years of low investment and political meddling. The result is a creaking system plagued by delays, overcrowding and slow freight delivery times that sap the competitiveness of Asia's third-largest economy.
Earlier, Railways Minister Pawan Kumar Bansal said the growth of railways is linked with the growth of the country. The 12th Plan railway size to be Rs 5.19 lakh crore, with gross budgetary support of Rs 1.94 lakh crore. While Rs 1 lakh crore will be raised from public-private partnership, Rs 1.05 lakh crore through internal resources in the 12th Plan.
The ministry also seeks to fill 1.2 lakh vacancies in Railways this year. Centralised training institute to be set up in Secunderabad. 47,000 vacancies for weaker sections and physically challenged to be filled up soon
Special A/C coaches 'Anubhuti' to be introduced in select Shatabdi and Rajdhani trains to give excellent ambience with commensurate fare. Cost of restoring and upgrading the Delhi, New Delhi and Nizamuddin stations is Rs 100 cr while close to Rs 37,000 crore will be needed to mechanise unmanned level crossings. All in all, Rs 95,000 crore will need to be raised in the next four years of the 12th Five-Year Plan, said Bansal.
The number of passengers trains has increased from 8,000 in 2001 to over 12,000 in 2012, yet losses continue to mount. Losses mounted from Rs 22,500 crore in 2011-12 to Rs 24,600 crore in 2012-13. Thus, Railways is likely to miss the revenue target of Rs. 1.35 lakh crore for the current fiscal. The revenue from passenger fares for the 10-month period since April 2012 is likely to be Rs 25,924 crore against the fiscal target of Rs 36,000 crore.
Identification of 104 stations for upgradation in places with more than one million population and of religious significance has been done, says Bansal. Common rail-bus ticket to be introduced for Katra- Vaishnodevi pilgrims.
Special A/C coaches 'Anubhuti', to be introduced in select Shatabdi and Rajdhani trains to give excellent ambience with commensurate fare.
Railways will use Aadhar data base for bookings and validation of passengers. Internet booking to be strengthened with next-generation e-ticketing system to eliminate delays.