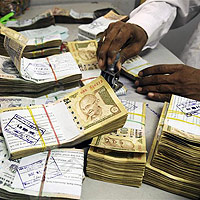 08 November, 2014
Print this article Font size -16+
Franklin Templeton plans to launch India's first Europe-focused mutual fund, an executive at the asset manager said on Wednesday, as the fund house looks to beef up its overseas portfolio.

The plans are still at an early stage, said Jaya Prakash K, director of global research & analytics at Franklin Templeton Investments. The product would consist of a fund of funds that would feed into one or more of the global asset manager's pool of Europe-focused funds, he added.

"Typically, before launching a product we have some discussions with our partners on what is the best strategy. Depending on the discussion over the next quarter or so, we will be able to file something with the regulator," Prakash told Reuters in a phone interview.

Franklin Templeton India already runs an Asian equities fund and a US equities fund and has filed for a Latin America-Asian fund, which is currently awaiting final approval from the Securities and Exchange Board of India.

It currently manages about $75 million in its two offshore funds, and has over $7 billion in assets under management overall its equity and debt funds, according to data from Thomson Reuters Lipper.

Indian mutual funds that invest abroad have grown more than 10 percent this year as investors look for higher returns.

The pan-European FTSEurofirst 300 index has gained 12.1 per cent since the end of June, on the back of improving economic growth. Meanwhile, the Nifty has gained 6.2 perc ent in the same period.