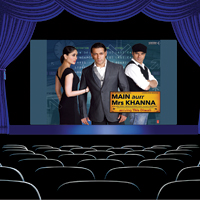 The trigger for the stand-off was the unexpected release of the film Main Aur Mrs Khanna by the film's producers UTV on pay-per-view channels on DTH barely five days after it launched in theatres on 16 October. Cinema owners cried foul as the DTH release hit their box office sales. Vishal Kapur, COO of the Fun Cinemas chain of multiplexes, concedes there were "no industry standards" on DTH releases but says the producers' action had hit the exhibition industry. "The 50:50 revenue share producers forced on us in April has already taken its toll. We have to now think twice before expanding to tier II and III cities," says Kapur. He adds that the way forward will be for multiplex chains to insert clauses in the weekly distribution agreements against early DTH releases.

The code for release of films on home video is also unwritten, but more adhered to. "Home video releases are four to eight weeks after the theatre release but we too are pushing for a shorter time lag so that the industry cuts its losses to pirates," says Hiren Gada, CEO of Shemaroo Entertainment, a home video distributor.

Gada will be supported by film producers who are looking for multi-platform launches. One reason why filmmakers try to get back their money in the first flush is piracy and poor theatre returns. The Rs 10,000-crore industry loses approximately 40 per cent of its prospective earnings to pirates, film industry estimates say. Though pay-per-view subscribers are a minuscule proportion — less than 100,000 among 70 million cable and satellite — one can see the shape of things to come.

"By the end of March 2010, the DTH viewer base would be over 20 million," says Salil Kapoor, COO of Dish TV. "Even if 5 per cent of them order movies at Rs 100 per movie, it is  a Rs 10 crore revenue stream that no director would want to let go off."

The spokesperson of Reliance ADAG Big Cinemas agrees: "Film exploitation must keep abreast with technology and monetise all emerging revenue streams." He adds that the stakeholders need to agree on specific release windows so that there is no confusion.

Written codes and iron-clad agreements are the need of the hour for Bollywood so that fewer people get hurt in the fracas.