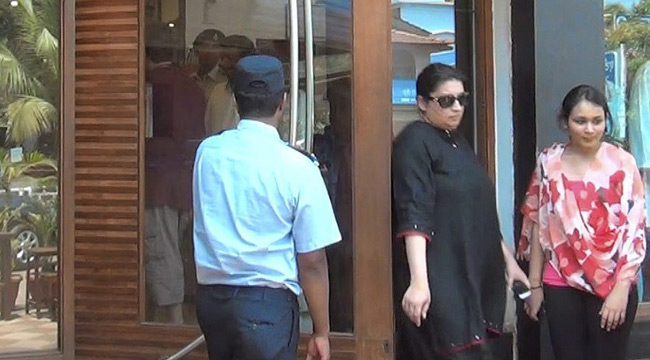 06 April, 2015
Print this article Font size -16+
An alert Union Minister Smriti Irani raised an alarm after she spotted a hidden camera at an outlet of a leading garment store that was pointed towards the trial room she used while trying out some clothes that led to a case of voyeurism being filed and arrest of four employees.
Four staff members of the Fabindia-owned outlet at the upmarket boutique chain at Candolim near here, who were earlier detained, were arrested by Goa police following a complaint by BJP MLA Michael Lobo who was called by Irani after the incident. The human resource development minister along with her businessman husband Zubin Irani are on a private visit to Goa.
Irani came across the camera when she was in the showroom to buy clothes on Friday and immediately protested, alerting her husband, said Superintendent of Police (North) Umesh Gaonkar.
She then called Lobo, who lodged an First Information Report (FIR). Fabindia is a Rs 1,000-crore homegrown lifestyle brand better known for ethnic wear.
Gaonkar said objectionable images were seen from the recordings of the hidden camera that was seized by police.
The arrested men were identified by the police as Paresh Bhagat, Raju Payanche, Prashant Naik and Karim Lakhani. They were booked under IPC Sections 354 C (voyeurism), 509 (intrusion into privacy) and also IT Act's Section 66E (capturing, publishing image of private area of any person without his/her consent).
"We will also be questioning all the top bosses of Fabindia, including their CEO and MD (William Bissell) tomorrow," Karthik Kashyap, SP of Goa Crime Branch, told PTI.
Footage from the camera, installed four months ago according to staff at the store, was being recorded in a computer in the manager's office, Lobo said, adding that it held many recordings of people changing in the trial room.
"When we went through the hard disk and computer to check the recordings we saw everything. All things were getting recorded over there when anybody was changing clothes. From the level of stomach till above everything was getting recorded," he said, adding, "This is mischief... Somebody has been watching the recording."
Police have already sealed the shop and is inspecting the showroom. The CCTV camera was installed on a wall, against a foot-high ventilation gap on the side of the trial room cubicle.
Goa Chief Minister
Laxmikant Parsekar, who is in Bangalore for the BJP National Executive meet, said stringent action will be taken against the guilty persons.
In a statement, Fabindia said it is "deeply concerned and shocked at this allegation. We are in the process of investigating this internally and will be cooperating fully with the police".
Bissell said there are security cameras in all the stores but they are not in trial rooms. "They cannot see what is happening inside the trial room," he said.
Bissel said his staff was not able to detect any of what Lobo had said of images inside the trial room and they have to be verified. "The cameras are routinely placed in places where shoplifting can occur".
(PTI)
Tags assigned to this article:
crime retail news 5 goa fabindia smriti irani laxmikant parsekar michael lobo zubin irani voyeurism