For The Love Of Learning 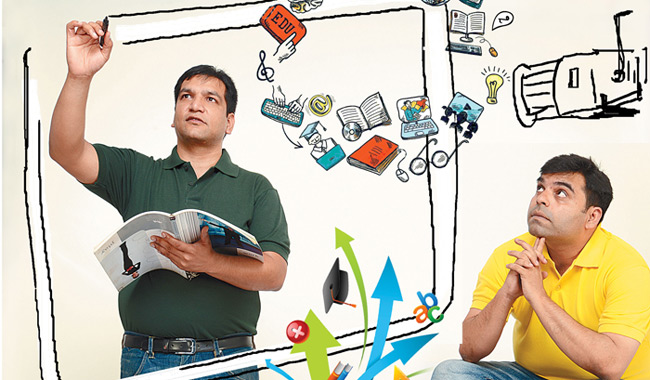 09 June, 2015
Print this article Font size -16+
Often, after a person hits 30 there is the yearning to go back to school. One may want to pick up a skill relevant to one’s profession. Or, perhaps study a subject for the sheer joy of learning. Edureka was founded on the premise that there are several professionals who want to learn — and several who want to teach. Lovleen Bhatia and Kapil Tyagi realised this was a business opportunity after they saw a corporate executive train students in one of their friend’s colleges, and started a similar business for students. But they discovered, by 2012, that the intention to upgrade skills was stronger among mid-level executives, who were ready to pay to be connected to a good tutor.

“We began creating a professional methodology by validating content and teachers, finally allowing the students to pick the course they want,” says Bhatia, CEO of Edureka. He adds that in the beginning, it was not easy because students would take the first two classes, which were offered free, and leave quickly after that. Only four in 100 students would return to attend paid classes. So Bhatia and Tyagi positioned their course as paid and fixed a deadline for students to submit their course work. This is when students began to pay and remained for the entire duration of the course.

Five years later the company is on its way to becoming a Rs 50 crore business and is also getting ready to raise more than $40 million for expansion. More than 245,000 students have completed Edureka’s course work. Vinayak Talikot, a software engineer from Mindtree, was all praise for it. “Their course on Big Data Hadoop provides one all he needs to know to shape up and grow. From the instructor to the support team, they made sure the entire volume of the subject was understood,” he says.

According to consultancy firm McKinsey, the US needs 190,000 data engineers and scientists and 1.5 million managers in the next five years. Gartner predicts the Big Data industry will create 4.4 million jobs globally by the end of this year. So, Edureka is in the right place to scale up its business.

Bhatia and Tyagi were residents of small towns Bareilly and Hapur in Uttar Pradesh. “We wanted to see the world and our getting into the Indian Institute of Technology (IIT) was a big thing for our families,” says Tyagi. Bhatia, who studied electrical engineering at IIT Varanasi, and Tyagi metallurgy at IIT Mumbai. They met for the first time in 2002, after they were both recruited by Infosys for its Pune campus. But the idea of becoming entrepreneurs would not take hold until 2005 when they started a software services firm, DbyDX, which was later sold to Kellton for an undisclosed sum in 2010. At the same time they met Neeraj Goel, owner of ABES Engineering College, who wanted them to train students for the corporate world. “It was Neeraj who seeded the idea of starting an education business,” says Bhatia. “Students don’t feel empowered in normal classroom lectures,” says Goel. “The Edureka model is perfect for students because they can listen to the lectures as many times as they want and perfect their skills over time.” Edureka allows tutors to present content through slides, on a hybrid Citrix Video platform, and all of it is voice-based training. In 2013 the two founders opened up their platform to several trainers, instead of creating the course material themselves. According to Sreenivasulu Saya, a teacher at Edureka and the founder and CEO of Bangalore-based Abheri Technologies, the module is unique as it derives course content from the vast experience of industry professionals. “Participants have access to a unique combination of instructor-led online sessions with demonstrations for the topics being taught, course slides, quizzes and assignments with evaluation and solution, video recordings of sessions for revision, and the final course project,” says Saya.

The US accounts for 45 per cent of Edureka’s students; the rest are from India. Its business model is simple: pay the teacher around 30 per cent or higher (for certain courses) and the rest are company revenues. Analysts say education is a high-margin business, with net profits in the region of 15 per cent. Edureka has been a self-funded company so far, with close to Rs 2 crore invested by the founders themselves. Their business has picked up by word of mouth; now they are ready to use advertising too. “We are in the midst of raising funds and scaling up our technology,” says Bhatia. Edureka’s next iteration is to better its mobile play, app and mobile website, and also enable students to be rated on their performance during the course. Currently Edureka has 250 courses and plans to scale up to more than 1,000 courses.

The education industry has seen some big ticket acquisitions. In India Pearson bought Tutor Vista, a video-based tuition platform, for Rs 700 crore. An online training firm called Lynda, in the US, was acquired by LinkedIn for $1.5 billion. So there is no reason why Indian online training firms should not be able to raise money. According to MeritTrac, more than six million students pass out of colleges in India every year, but only 15 per cent of them are employable. Online certification and training courses prepare students for the corporate world.

Competition for Edureka comes from Jigsaw Academy and SimpliLearn. The two companies have different online business models and are also raising money to scale up their operations.