For The Larger Good 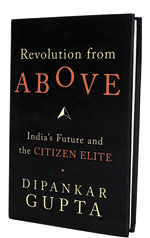 08 November, 2014
Print this article Font size -16+
Professor Dipankar Gupta spent over 30 years, teaching sociology and anthropology at JNU till 2009. He continues to be engaged with academics and has authored /edited nearly 15 books. In Revolution From Above, Gupta talks about revolution in a democracy. His view is that changes can be brought about only by ‘citizen elites’. India has been reduced to a democracy that is exploited only by politicians and their cronies. The country has perhaps created an  unprecedented divide between the haves and the have-nots in just six decades since Independence. India is a result of the shape given to it by a few ‘influencers’. Unfortunately, the positive impact stops with Gandhi and Nehru. After that, no one has taken charge of the destiny of India.

The author talks about the three ingredients of democracy: liberty, equality and fraternity. India has somewhat succeeded in the first two, but fraternity is totally absent. This is a key point made in this book. Essentially, Indians have never grouped together as one. There is a divide caused by religion, caste, language, etc., which has been exploited by politicians to further their own cause. No other democracy lacks ‘fraternity” so much, he writes.

The author, through this book, compels the reader to think ‘what will change this?’ This change has to come from an ‘elite’ leader. It was ‘elite’ leaders like Gandhi or Nehru who  helped eradicate ‘untouchability’ or promote gender equality. These elite leaders had no vested interest in what they helped achieve. Gupta exposes how politicians have used these ethnic divides to further drive a wedge between Indians and use divisiveness as a political weapon. Equality is brought about by making barriers vanish and not by creating fresh ones through reservations.

However, the author believes that since Gandhi and Nehru India has not thrown up any ‘elite’ leaders. Gupta has arrived at this conclusion after doing a highly logical analysis of subsequent leaders, including Prime Minister Manmohan Singh.

As regards healthcare and education, Gupta points out how Nehru let the country down on both counts, in spite of setting up stellar institutions such as AIIMS and the IITs. For those who want to have a different perspective on Gandhi, Gupta provides ample instances.

There are discussions on urbanisation, the contribution of the migrants to an urban city. There is so much packed into this small tome that it deserves multiple reads to revisit the author’s thoughts.