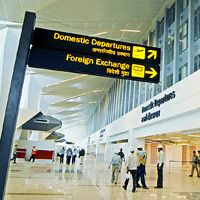 08 November, 2014
Print this article Font size -16+
A heavy blanket of fog forced authorities to suspend flight movement at the IGI Airport for around three hours, leading to delay and diversion of around 150 domestic and international flights on 6 January.

Between 8 PM last night and 8 AM this morning, around 150 flights, either arriving here or departing from here have been cancelled or diverted due to extremely poor visibility at the airport due to dense fog, airport officials said.

Around 51 domestic and international flights departing from here and 39 scheduled to arrive here, between 8 PM last night and 8 this morning, have been cancelled.

Also 52 incoming flights have been diverted to Amritsar, Lucknow and other destinations, they said.

A SpiceJet flight from Goa to Delhi, with 132 passengers and four crew onboard, had to make an emergency landing at around 9.50 PM as it ran short on fuel.

Lounges at the airport were packed with passengers who complained that they were not given information about the flight status.

Long queues were seen at airline counters for collection of refunds for cancelled flights or to get a seat on any early flight.

Around 15 flights coming to Delhi were diverted to Amritsar.

People could be seen moving from one counter to another in search of information or tickets.

"I had to wait for about three hours before the airline decided to cancel my flight to Mumbai. Now I am waiting in the queue to get a refund," said Anil Kumar.

One of the passengers Anna, who was to arrive in Delhi from Hyderabad by an Air India flight which was subsequently diverted to Amritsar, said they have no clue when their flight will leave for Delhi.

"I have been waiting through the night at Amritsar airport. No idea when our flight will leave for Delhi.

Authorities have told us that it might take off after noon," she said over phone from Amritsar.

The national capital has been witnessing thick fog since 5 January.

Dense fog started to descend at the airport around 7 PM last evening. Within two hours, the runway visibility dropped from 500 metres to less than 100 metres.

Operations almost came to a complete halt around 10 PM after runway visibility dipped to less than 75 metres, which is the minimum required visibility condition for an aircraft to land using CAT IIIB instrument landing system.

The general visibility was almost nil.

The minimum required visibility for an aircraft for the Low Visibility Take Off (LVTO) is 125 metres and 150 metres, depending upon the size of the aircraft.

Yesterday, the visibility remained poor during the whole day which led to delay in schedule of around 206 domestic and international flights.

Flight operations resumed today around 1 AM, when the landings started. Priority was given to international flights, as most of them operate at night, they said.

Though the visibility was poor, planes were landing using CAT III B ILS and the take off started around 4 AM, when runway visibility improved to more than 150 metres on the main runway (28/10), officials said.

But gradually visibility on the third runway, (29/11) also started to improve and both the runway were used intermittently, they added.

Delhi had been witnessing dense fog from Saturday last, which, according to the Met Department, is the "season's worst".

Met officials said it may be the worst fog after January 2010.