Washington [US], February 13 (ANI): The five-time 'Jeopardy!' champ Brayden Smith, who appeared in the last episodes of the game show hosted by the late legend Alex Trebek, has died at the age of 24.
According to Fox News, the genius died last week on February 5, Friday. However, the news came out when the mother of the departed soul announced the same on Twitter on Saturday (local time).
She shared a picture of Smith featuring him on the game show's set. Alongside the picture, she wrote, "We are heartbroken to share that our dear Brayden Smith recently passed away unexpectedly. We are so grateful that Brayden was able to live out his dream on @jeopardy."
Fox News reported that the cause of death was not mentioned in his obituary.
According to the obit, Smith who was Alex Trebek's last great champion of the game show, intended to attend law school with hopes of working as a lawyer for the federal government and recently worked as an intern at the Cato Institute in Washington, D.C., researching criminal justice reform issues.
He was deemed as a jack-of-all-trades who loved to read about political science, philosophy, economics, and history. Not only an expert in academics, but he was also good at sports and was a National Merit Scholar semifinalist, was active in the Junior Classical League, and captained his school's Quiz Bowl team to back-to-back state runner-up finishes.
Soon after Smith's mother announced about the news of his departure, the official account of 'Jeopardy!' retweeted the statement and noted, "The JEOPARDY! family is heartbroken by the tragic loss of Brayden Smith. He was kind, funny, and absolutely brilliant. Our deepest condolences go out to Brayden's family. He will be missed." 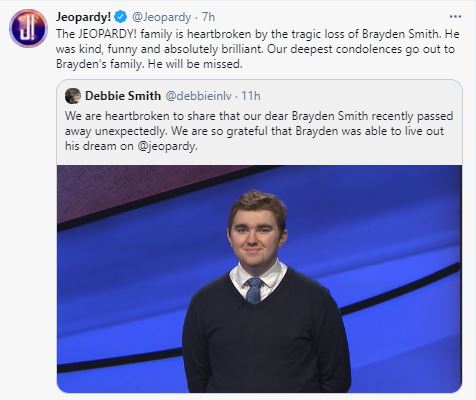 According to the sources, the late champion was gearing up to compete in the popular game show's 'Tournament Of Champions'. (ANI)